Loch has given up a lot to come to the college of his choice, but he never expected to find someone like Marcus Battle.  His challenge in his second year is to see if he can keep him interested, or even if he wants to…

Loch has chosen to forgo the usual paths that marked men, like him, complete to enter into Service and become fabulously wealthy.  He has instead chosen to attend the University of North Carolina.  His first year was quite extraordinary as he was drawn into a situation with the football team.  That’s where he meets another freshman, Marcus Battle, who becomes his boyfriend.  Their relationship is just getting started as they begin their second year in school.  Neither one of them knows how being separated in the summer will affect their relationship or what is about to come with the new year.  Will Loch grow tired of the same man all the time or will Marcus put an end to the relationship in order to focus on his football dreams? 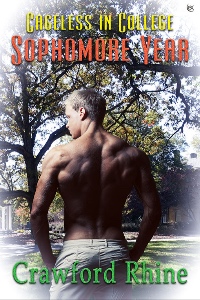 It was the summer after my freshman year of college. Having experienced a weird sort of initiation by the football team at the beginning of my school year, I was now settled in and had finished the year on the Dean’s List with a boyfriend who was on the football team. It had been a very good year for me.

When I was thirteen, at the precise moment of my birth, I was marked. A thick blue line appeared on my jaw line from my ear lobe to my chin. The mark, as it was called, was a sign in our world. It was rare and it marked me as special.

The world I grew up in was completely masculine. There were no women in our world, having been separated from the men for thousands of years. They had their own world to live in and procreation was accomplished by the use of catalogs. When the child was born, if it was male it was returned to the father in our world and if it was female, it stayed with the women.

The blue line on my face readily told anyone who looked at me that I was sexually attracted to men. This was both a blessing and a curse. The blessing was that I could have my pick of almost any man in the world. Even though NOMARs weren’t sexually attracted to marked men, they had to have sex and in the absence of women, they were more than willing to fuck men who liked to be fucked.

It was a humiliating, degrading proposition, but one that could change your life. I loved being in control, and to give that up to take an almost random draw to see who would get to fuck me for the next year or two was unacceptable.

That lack of control paired with my confidence that I was going to make something of myself one day was the reason I decided to not attend The Service Academy. I stayed in high school and took a boyfriend each year, sometimes more for safety than for lust. I had also deferred my calling in The Service until after college. I had been told that this would probably severely reduce my chances at getting a call to service, but I wanted to have the college experience and I particularly wanted to go to the University of North Carolina.

I had started at UNC last fall and immediately got sucked into choosing a football player to date. Apparently, it was a source of pride among the Tarheel football team that they claimed every marked student as their own. As far as I knew, there were only two of us and the other marked man was a graduate student who had already been in service and was now independently wealthy, thanks to his Master’s money.

I had slept around with a few of the football players until I decided on dating Marcus Battle. He was a quiet unassuming freshman when I met him, but his control over me made my blood boil. He had kept me at arms’ length until I had selected him, but then we had fucked like our life depended on it and it was the greatest sex I had ever experienced.

Our first year at school had flown by in a blur of classes, sporting events, and sex. We’d spent spring break in Florida, where we were drugged at a beach party, but were able to escape before anything worse happened to us. Marcus and I finished the year on a high note, but the specter of the coming summer spent apart loomed large for us.

Marcus had encouraged me to take a lover over the summer so that I wouldn’t be restless without him, but he did stipulate that it had to be someone older. He was still in control of me even though I was in South Carolina and he in Ohio.

The first thing I did when I got home from college for the summer was to convince my dad and brother to spend our vacation at Cedar Pointe Amusement Park in Ohio. We picked a date in early July and I immediately texted Marcus to tell him. He answered immediately and said that he and his father would join us there.

I read his text at least twenty times. It gave me a tingling sensation throughout my body, much like Marcus did when he was in the same vicinity as me. Marcus Battle and I had some kind of crazy physical connection that I had been unable to explain. Neither of us seemed to be able to get enough of the other and we genuinely enjoyed being with each other.

Unable to control myself, I went to the bathroom and whacked off while I visualized seeing Marcus at the amusement park this summer. He held such sway over me even from a distance that it was almost scary.