The heir of a Duke, betrothed to a daughter of his king, Jeremy Nottingdale thought he knew what life had in store for him until his uncle threw him overboard. Accustomed to a life of privilege and pampering, Jeremy is suddenly faced with the challenge to survive. Cast Away tells of Jeremy’s transformation from a spoiled aristocrat to a respectful nobleman not only because of his time marooned on an island, but also because of the woman he finds there. Beautiful, intelligent, and resourceful Sanura is an enigma. Rather than seduce her, as would be his usual wont, he finds himself acting as he knows a gentleman should. Over time, the challenges and dangers of their life of exile draw them closer. They find they can express through love what they cannot in language.

Jeremy’s greatest desire is for a rescue so he can see Sanura safely to her family, whoever and wherever they are. Yet the granting of this greatest of his wishes would mean he must part with her and never see her again. When the time comes, will he be able to cast her away? 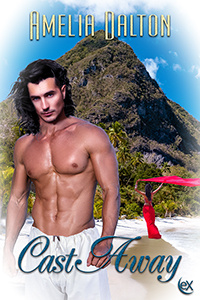 Jeremy Nottingdale stared into the black waters he was soon to meet with the brittle twists of rope sinking their tiny barbs into his wrists. A larger, cold pricking at his throat held ready to plunge at his first move. He smelled the tang of sweat and metal on the hand under his chin. It was a hand he had recently clasped in friendship, a hand he had placed his own beside in the working of the ship, and a hand he had trusted. He had been taught better than to trust. A man of monarch’s blood can trust no one. The lesson came back to him, sharp and poignant as the blade at his throat. He had set that wisdom aside, as he had many things, seduced by the adventure of the sea and the camaraderie of sailing men.

He had spent—wasted—his privileged childhood yearning for the sea. He had grudgingly been allowed to fulfill his dream, but not until he had sworn an oath to abandon it afterward and assume the duties of his birthright.

Yet the sea was a jealous mistress. She would see a man die before allowing him to set her aside. Even he, regal man-child that he was, would not be forgiven.

Jeremy’s gaze moved from her undulating bosom to meet those of the man who approached. “You’ll not get away with this, Ombreux,” he said calmly, despite the ice floe in his innards. “My father will see you all hang for this.”

The barrel of the man’s chest swelled under his graying beard. He threw his head back, and the deck of the ship rang with his laughter. “Your father!” he scoffed. “Your father will never see this vessel again unless he grows the balls to command a ship in battle.”

This remark elicited laughter from the men.

Ombreux looked down at Jeremy, his eyes colder than the sea. “He used what little he had to burden my sister with your ungrateful carcass. I think, my nephew, that was more than a feat for him.”

A hot spark ignited above the frigid darkness of Jeremy’s gut.

“He was right not to trust you. The only reason he did was because he loves my mother so much.”

“It is because I care for her it pains me to do this, but it is the penalty she must suffer for betraying the family and marrying a duke rather than a king. Now my son will be the one to marry royal blood, and the true monarchy will be revived.”

“Justice will find you!”

Ombreux laughed again. “It hasn’t yet, and here’s a parting secret for you, nephew.” He leaned to whisper in Jeremy’s ear. “I’ve done far worse than this.”

Jeremy stared at his uncle’s smug, jovial face. Slowly, he became aware of what Ombreux was suggesting—the most sinister of deeds.

Ombreux’s expression melted into a scowl. “Overboard with him!”

The men cheered. Jeremy lanced Ombreux with his gaze as strong hands turned him and shoved him to the railing. Even as frigid terror washed over him, he refused to show it. He was of noble birth. He would be noble in death as well.

The inky water sent crested tendrils splashing up, eager to seize, engulf, and drag him down to the gate of hell itself. He closed his eyes, and his legs went numb. The man that held him wrapped an arm around his chest. The man’s other hand, still bearing the dagger, seized his wrists as another man bound Jeremy’s ankles.

“Stop squirmin’, ye scoundrel!” the man said loudly, though Jeremy barely had the power to stand.

Jeremy felt the blade slide along his wrist in their struggling movements. The tension of the rope eased, and cold metal pressed onto his palm.

Hot breath blew against his ear. “Bonsort, my liege.”

The ship left his feet. He made a quick gasp of fear and anticipation. An explosion of cold jarred his body, seizing him in an insensate hand of silence and terror. He swirled about in the wake of the passing ship. The surface was lost, but his senses weren’t. He resisted the urge to struggle so he could more easily rise to the surface. All he could hear was the rush of water and his heart pounding. Panic closed in on him just before the black hand of the sea uncurled from over him and he burst through the surface.

He took a tremendous breath, coughed violently, and another wave immersed him. The sea was pulling him down, but he remembered the dagger. The blade cut into his fingers and palm, but he didn’t dare loosen his grip.

The sea broke once more, and he took a deep breath, putting the hilt between his teeth. When the next wave sent him under, he bit as hard as he could into the soft leather and put the rope on his wrists to the blade.

The rope had already loosened. A few hard rubs frayed it apart, and Jeremy wormed his hands free. He took the blade firmly in his right hand, surfaced for a breath, and put the blade to the rope around his ankles. The next time he surfaced, spitting seawater and contempt, he looked around for the ship. Her lights could not be deciphered from the stars, and there was no moon to betray her. He was alone in a black sea.

Anger overrode the fear that threatened to paralyze Jeremy. “With the stars and any god that commands these waters as my witness, I swear to you, Ombreux, I will have my vengeance against you. I will live, and everyone will know the crimes your black heart has committed. I will not die until I see you die first!”