Declan Jericho is a vampire with a purpose. His best hope for success rests on the shoulders of a brilliant young cancer specialist, but saving the undead isn’t exactly the career path Dr. Maya Sheldon has in mind.

When Dec kidnaps Maya from work, the last thing she wants to do is help him. Then she discovers what he wants her for -- to develop a cure for the mysterious illness killing the young vampires in his care. Vampires or not, she’s unable to abandon them. Her interest in Dec quickly shifts from professional to something more intimate, but as their attraction grows, darker secrets threaten their newfound relationship. Dec has his own reasons for wanting the young vampires cured, and he’s not telling ... 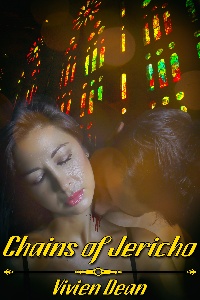 It seemed to take forever for her to fall asleep.

As the minutes passed, and the first hour slipped away, Dec remained vigilant as he listened to her body’s rhythms, felt the tension slowly dissipate from her limbs as exhaustion eventually won her over. To be certain, he waited another half an hour, staying still, convincing himself that she was finally asleep, before easing out of bed. It had absolutely nothing to do with enjoying the feel of a warm human body, and a beautiful one at that, sharing his bed for the first time in a decade.

He turned on a lone light by the couch, and settled in to try and get some reading done before attempting to sleep himself. His body burned from her stolen heat, and the surge of electricity that still charged through his veins from her blood made rest impossible to contemplate at the moment. This wasn’t how he’d envisioned the night going. Though he’d always intended to bring her back to their refuge, he’d never wanted her to be so closely tied to his quarters, or to have seen the others until he’d had the opportunity to prepare her. He’d watched and researched Dr. Maya Sheldon long enough to know that was the best way to get a positive result from her. Now, however, the rules were changed.

Unbidden, his eyes lifted from his book to settle on her recumbent form. Her thick dark hair was loose from the ponytail she normally kept it in, and the soft waves against her flushed cheeks made her seem younger than her thirty years. It was the first time he’d seen her with her hair down, making her appear surprisingly softer. An illusion, he knew. Time and time again, Dec had been impressed with how assiduously she pursued her medicine, refusing to let negative diagnoses deter her from continuing to try. It was the primary reason he’d chosen her for this. She would not give up.

But had he crossed a line in biting her? Would she still help him when day came and she was thinking more clearly about her circumstances? He hadn’t had a choice; she had to realize that. If she’d only stayed put --

The direction his thoughts were going almost made him laugh out loud.

Had he really expected her not to run to the aid of screaming children? After all, that was how he had known he could get her attention at the hospital. It had been his own fault for not locking her up behind him.

He wouldn’t make that mistake again.

Reluctantly, Dec turned his attention away from Maya and back to the textbook in his lap. He couldn’t return to his bed until he had better control over his body. At the moment, his every nerve was aware of her presence, his erection straining against the denim of his jeans. He wanted nothing more than to strip out of the rest of his clothes and finish what he’d started with the bite, sinking into her supple flesh in more ways than one. It had been a long time since he’d felt the desire to forget his vows, and even longer since he’d seriously contemplated dismissing them entirely, but something about Maya Sheldon made him wonder if it might not be possible to have it both ways.

She inspired hope. He’d seen it in the faces of her patients at the hospital.

Funny, but Dec had never once considered that just maybe he might be included in those numbers, not even when he’d decided she was his best hope to save Danny and the others.