Instagram Micro-influencer Flynn Hudson loves the idea of launching a revolutionary new convertible SUV in Australia. Then he learns he’s supposed to spend two weeks in the celebrity-drenched Byron Bay. Flynn grew up one town over in Mullumbimby. Twenty years ago, Flynn’s whole family left town in disgrace. When he discovers his boss and traveling companion is reality star and major loudmouth Jimmy Raynes, he frets that Jimmy will find out his secret and blab it all over the Internet.

Can Flynn redeem his family’s terrible reputation? Can he boost his influencer ranking and sell the biggest thing he’s ever been asked to handle? Or will he wind up being run out of town a second time?

Jimmy Raynes is fixated with the idea of having cool, sexy Flynn Hudson return to his roots in Australia to help him sell his hot new SUV. Jimmy’s loved him from afar since discovering his Instagram two years ago. Jimmy’s convinced Flynn’s the only guy who can get his crazy new toy into some hot celebrity hands. Jimmy has a lot er, riding on this deal. But it’s not just sales he wants from Flynn. Oh no, Jimmy wants so much more. 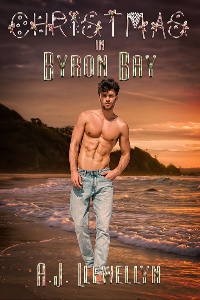 “We arrive around eight-thirty in the morning, then we take the flight to Ballina.”

“Now, I don’t want you to worry about entertaining me when we get to Byron. I’m simply there to keep an eye on my investment. You know, insurance requirements.”

“Right, okay.” Flynn was frankly relieved. He didn’t want to have to fake a friendship for the sake of Instagram.

“I’ll have a limousine pick you up at six o’clock,” Jimmy continued. “I’ll need to give the driver your cell phone number so he can text you before he arrives. If that’s okay.”

“That’s no problem.” Boy, this guy’s a lot nicer and polite than I thought he’d be.

“Now. I know you’re from Byron. Do you still have family there?”

Flynn balked at the question. Not many people knew he came from the Byron area, though in fact, he’d been born and raised in Mullumbimby, one town and twelve miles away. His heart still hurt thinking about Mullumbimby, which always called itself ‘The biggest little town in Australia.’ He wondered if his treasured, simple life had changed much since he’d last been there. That was twenty years ago, when he’d been fifteen years old.

His family had left in disgrace, and it had been horrible. He and his parents never talked about it, but now he was going back. He knew his parents never looked at his Instagram. They thought he should get a proper job.

Flynn didn’t look up his hometown online. During his time there had been a main street with shops. And a lot of ‘alternative’ farmers growing weed. It had more than its fair share of hippies. He hoped it hadn’t been marauded by influencers and Hollywood types, like Byron Bay. When he’d left Australia, the only celebrity living in Byron was Paul Hogan.

Some people made fun of the Aussie comedian picking such an off-the-grid location and building a garish mansion. But Paul’s crystal ball must have been working though because he’d sold it for eight million dollars.

“No, no family there,” Flynn said. It hurt to say that.

He scanned Google reports, shocked to discover that several movie stars owned homes in Byron now. Australian actors Chris and Liam Hemsworth appeared to live there full time. Other actors had snapped up multi-million-dollar McMansions too.