Christmas with the In-Laws (FF)

On a long, cold, winter’s night, Emma and her girlfriend Kathy make the journey to visit Kathy’s family for the holidays. Emma has never met Kathy’s parents, though she has been wanting to for a long time. She has been warned about Kathy’s mother Doreen and her high standards.

Kathy is unusually nervous about the whole thing, and, when they arrive, she soon disappears for a “talk” with her mother. As Emma works to get on the family’s good side, she starts to grow more suspicious -- why is Kathy sneaking away from family activities? And why was she talking to Doreen for so long? 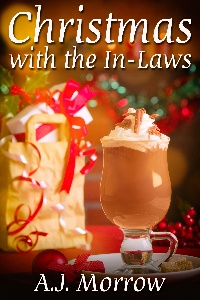 Christmas with the In-Laws (FF)

“Are you ready?” Kathy asked.

Kathy nodded and raised her hand up to the door knocker. She banged it once, twice, and then a third time, letting the sound echo against the solid oak of the frame. It was a well-tended house, one that obviously had a lot of pride put into it, and Emma took a moment while they waited to properly look at all the little wood detailing around the wall. According to Kathy, it had been in the family for generations, passing from one matriarch to another, and had been the centre of family gatherings for just as long.

It took a moment, but eventually the door swung open, light spilling out with it, to reveal a short, stout woman somewhere in her fifties. Her hair was bound up in a bun at the nape of her neck, a few greyish-brown wisps escaping around her ears, and a pair of round spectacles were pushed up the bridge of her long, narrow nose. She burst into a smile when she saw Kathy, her face breaking up into the same dimpled grin as her daughter.

“Kathy, baby, you’re here!” she cried, throwing her arms around Kathy’s shoulders. She pulled her in tight, forcing her to stoop, and pressed her chin to her shoulder.

They broke away after a moment so Kathy could be thoroughly inspected for any new haircuts or changes. She hesitated as her mom fussed over her, before gesturing to Emma.

“This is my girlfriend, by the way, mom. Her name is Emma. Emma, this is my mom, Doreen.”

Emma smiled and held out a hand for Doreen to shake. She stepped forwards, watching as Doreen gingerly returned the gesture.

“Yes, Emma -- how lovely to meet you. The one Kathy is always talking about.” Doreen narrowed her eyes. “How old are you, exactly?”

Emma glanced nervously back at Kathy. “Uh, twenty-seven. Only a year younger than Kathy -- I’ve got a bit of a baby face, I know.”

Doreen nodded, though she didn’t seem satisfied with the answer. “Of course,” she said, a slight hostility icing her tone. “Come on in then, dears.”

She disappeared back into the house, opening the door wider for them to enter through. Kathy followed first, significantly less rattled by the welcome than Emma was, with Emma a few steps behind.

The house was warm -- warmer even than the car -- and full of light and soft noises. People talked in the background, accented by the sound of clinking glasses, and the hallway was lit both by the usual lights and a series of red and green candles hung along the walls. They took off their shoes and placed them in a basket by the door, all the while taking in the smell of roast chicken and potatoes emanating throughout the house.

“Why, you must be so cold!” Doreen said, brushing a few stray snowflakes from Kathy’s hair. “Give me a moment and I’ll find some extra sweaters for the two o’ you.”

“Nonsense,” said Doreen, tutting at her daughter. “I’ll only be a moment.”

She darted upstairs, surprisingly fast for someone that small, and left Kathy to take Emma through the house. They left the bags at the bottom of the stairs, planning to take them up later, and walked through the long hallway hand in hand.

“I think she likes you,” said Kathy.

Emma scrunched up her face. “I don’t.”