Shay Rogers has avoided going back home to Alabama because he fears running into his high school lover, Dwayne Sayles. Because of Shay’s reputation as an All-American straight stud, he tried to keep his love for Dwayne secret. Shay’s fear of his friends and family finding out about him ultimately led to his breaking up with Dwayne.

However, when the invitation to his fifteen year high school reunion arrives, Shay’s friend convinces him to go, with her as his fictitious girlfriend.

Within moments of meeting again, the long-dormant feelings between Shay and Dwayne are rekindled, but so are Shay’s fears.

Is Shay finally ready to embrace the chance of happiness by living openly with Dwayne, or will his need to hide the truth about himself win out yet again? 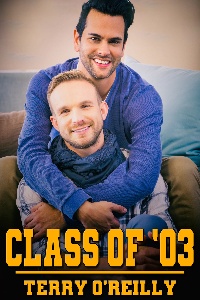 Shay went into his bedroom. He stripped down to his briefs and began a workout. A natural athlete, he'd always been proud of his body. Handsome and well-muscled, with a thick covering of dark hair on his chest, and a five o'clock scruff, he'd had no trouble attracting women ... or men. That'd been his downfall.

He finished working out and took a shower. When he was done, he put on a tee and lounging pants and returned to the living room. Jasper was still snoozing on the couch.

Shay picked up the mail from where he'd left it when he'd come in and sat down next to the dog. Jasper raised his head and let it flop on Shay's lap. Shay stroked his long, silky ears. Jasper sighed.

Shay sorted through the mail. When he came to Tom's letter he held it for a moment, just staring at it. His first impulse was to toss it aside; he'd done that with all his previous invitations to his high school reunions. However, Melissa's words came back to him.

Well I think you should go. You'd have a good time, and since you've already set me up as your girlfriend, I could go with you. Then you'd have a cover if it's that important to you to keep your secret.

So this time Shay opened the letter. He scanned the page.

The 2003 class of Gregorville High is going to have another reunion! It's 15 this time, so start those workouts and start shedding those extra pounds, so we can all impress one another.

"Leave it to Tommy," Shay said aloud to Jasper. "He never did mince words."

Shay read the rest of the letter and made mental note of the planned activities and dates. At the bottom was a handwritten note.

Shay. Get your ass down here this time. We're all dying to see if the guy voted Most Handsome, Best Athlete, and Most Likely to Succeed has fulfilled that prophecy. Seriously, it'd be great to see you, man. Tom.

Shay laid the reunion letter aside. He wasn't convinced he'd go. However, for the first time he was at least tempted.

After feeding Jasper, making his own dinner, and cleaning up, he took the hound for a walk. All the while he thought of what it would be like to go back home again and see his old friends. And if Melissa went with him, he'd be able to avoid the persistent questions from his family of why he was still single.

When Shay got back to the apartment, he pulled out his senior yearbook and sat down on the couch. Jasper immediately resumed his recumbent position beside Shay, his head once again on Shay's lap.

Shay opened the book and began a trip down memory lane. There were pictures of him in his football and baseball uniforms, pictures of him in student council and class advisory board, National Honor Society, and Lettermen's Club. On the memories page he was shown dancing at the senior prom with Lilly Franklin, the girl he'd dated and taken to all the major dances.

Then he turned to a page that made his heart stop. It had a picture of a scene from a play he'd been in his senior year. There before him was the reason he'd never gone back -- Dwayne Sayles. Shay closed his eyes, leaned back on the couch, and remembered.

Made for Him (MM)
Lynn Hagen
In Shelf
$4.99
Tweets by
sirenbookstrand