Two young men, a mysterious silver bowl, and a shuttered Victorian mansion steeped in the sadness of a family curse ...

Alex White and Xander Browne are newly-hired curators in the American Wing of the Metropolitan Museum of Art in New York. The rediscovery of a long-forgotten silver bowl covered in Arabic and Hebrew inscriptions sends the pair on a hunt for clues as to why it was made and by whom. Their search begins to unravel the secrets of the bowl’s origins as well as its connection to the Bencliffe family, whose centuries-old history is darkened by a legacy of madness and suicide.

What begins as a professional friendship for Alex and Xander quickly turns personal as the two find their lives increasingly intertwined in unanticipated ways. Far beyond a mere curatorial research project, the story of the Bencliffe bowl takes on the aura of destiny as Alex and Xander make discoveries together that turn their world upside down.

From neglected archives in New York and Boston to the shadowed corners of Cliffhanger, the turreted Bencliffe mansion looming over the Hudson River, the truth emerges, forcing Alex and Xander to wonder if, perhaps, their meeting might not have been a coincidence after all. 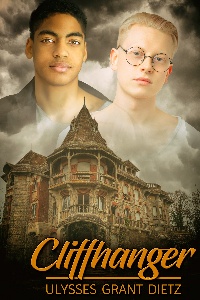 He sat at his new desk for a while, staring out across the machinery-covered rooftop to the thin edge of green he could see to the west. Central Park. He had a Central Park view, however minimal. This was real.

Reaching up to set his hat on the file cabinets, Alex leaned back in the desk’s ergonomic chair, and turned on the computer. He used the information considerately left for him on a half-sheet of paper on the desk to log in and find his email account.

To his surprise, about a dozen emails already waited in his inbox, some of them related to the intake process for new employees, but others related specifically to the job he had been hired to do -- act as an assistant decorative arts curator focused on the department’s growing jewelry collection. His master’s thesis had been on American jewelry manufacturers and how their products related to other aspects of the design and production of home furnishings in and for the United States. Apparently, there was nobody else to handle these emails, and some of them had been sitting in his box for a few months already. A good place to start.

Alex got so absorbed in his work, he barely heard a soft clearing of a throat behind him. Turning, he found himself being studied by a beautiful young man who appeared to be his age, leaning casually against his door jamb.

“Hi,” Alex managed to get out. He stood and moved the few steps to the door, holding out his hand. “I’m Alex White,” he said, smiling tentatively.

The reaction was not what he’d expected.

“Uh, no, that’s my name. Alexander White.” He hesitated. “Did you not know I was coming?”

Shaking himself slightly, the young man looked abashed, and waved his hand in front of his face as if clearing away cobwebs.

“I’m so sorry, um, Alex. You just took me by surprise. I’m pretty sure I didn’t mean to say that out loud.”

“Surprise? How?” Alex’s initial embarrassment gave way to curiosity at the change of demeanor.

The young man seemed to tower over Alex, at least six-foot-five to his own five-nine. Slim and graceful, he had large deep brown eyes, ringed with long lashes, skin the color of really good coffee with a dollop of cream in it, and a breathtaking smile.

He bent forward slightly, in an oddly courtly gesture, reaching out a large, long-fingered hand to engulf Alex’s own and said: “My name is Alexander Browne, but everyone calls me Xander.”

Alex sat back down, while Xander remained standing, looking down at him with a strangely beatific smile on his face.

“I hadn’t heard your name before,” Xander added. Here he paused, as if weighing what he was going to say next. “And, to be honest, you live up to that name rather dramatically.”

A look of horror flashed across Xander’s face, “Jesus, I’m sorry, that was awful, it’s just ...”

“Never mind. You’re not the first. I am indeed very white. Although some would say pink, because I know I’m blushing terribly.” He ran a hand through his thick shock of snow-white hair, blinking up at Xander with ice-blue eyes ringed in the palest of lashes. “I’m albino. Very sensitive to bright light. By definition very white. Even I notice the irony of my name.”

“And now we have a shared irony to talk about,” smiled Xander, radiating a gentle delight. “Why don’t we pursue this while we do what Stephanie asked me to do, and maybe I can avoid embarrassing either of us any further.”

He stepped backwards out of Alex’s office and, with a theatrical sweep of his arm said, “Mr. White?”

Alex stood and moved toward the door, nodding with mock seriousness at his new friend. “Indeed, Mr. Browne.”

Together, both of them chuckling quietly, they set off down the hall to the elevator.