As a counter-boy at a high-end men’s boutique, Charlie Jessup’s life consists of little more than work and sleep. That, and enough flirting to help guarantee his commission on sales will pay his rent. So when a twist of fate, and some behavior unbecoming that of a Ganymede employee, leaves him in possession of a dead man’s pass to a mysterious Club 669, Charlie has no desire to waste it.

Every seventeen years, the House of Witches throws a party like no other. It’s invitation-only, and for centuries it has helped ensure peace between the covens. It’s the last place Caspian wants to be, but with the death of Queen Avel, and his own imminent rise to the throne, it’s more important than ever that he attends. The stability of the House depends on it.

In four days a new king will be crowned, but when Charlie unintentionally crashes a gathering of the most secretive of all the Great Houses, he sets in motion a series of events that could disrupt the transition of power, and threaten the future of the House of Witches forever. 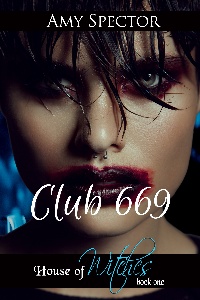 “Friend of yours?” I looked up, finding Sebastian and accepting the glass he held out, something I found trickier in the glove.

“Nope.” I took a sip, fighting a grimace at the sour sting of it. I wasn’t well-versed in alcohol, but whatever this was, I wasn’t crazy about it. “What do I owe you?”

“Just a dance.” Sebastian smiled down at me and took a sip of his own drink. “Maybe your name?”

“Oh.” I laughed, taking another swallow of the vile liquid. “Charlie.”

“You’re really hot, Charlie.” I started to say something but lost my train of thought completely when his fingers dropped to stroke across my stomach.

“Who are your people?”

Even if I knew how to answer, I couldn’t have. I couldn’t even think, not with him touching me like that.

“You’re not what I was expecting.”

He moved his hand up, brushing against the barbell in my right nipple through the thin fabric of my shirt, and I felt it all the way down to my balls.

“Drink up, Charlie.” His lips were pressed against my ear again, the moist warmth of them making me dizzy.

Bodies moved together, a blur on the dance floor, the light a hypnotic flashing, and I felt warm from the tips of my ears to the bottoms of my feet. Sebastian touched my nipple again, before dropping his hand to press over the fly of my pants. I was half hard, my pulse pounding, my breath coming in short pants.

He grabbed my hand, pulling me through the crowd and into another one of those dark halls, and for just a moment my only thought was…what about our dance? But I was too tired to ask.

We climbed a flight of steps onto what could have only been described as an observation deck. It was full of people in expensive clothes, drinking from tall, fluted glasses and watching the activity on the floor below from a wide balcony. It was like some sort of high-end peepshow, or a sex-club for the very rich and very bored.

Another archway brought us into yet another hall, this one lit painfully bright. The passage was lined with doors, each opening into small, intimate rooms with couches, chairs, and the occasional bed. There were other rooms too. These were closed, but being well and truly used, judging by the sound of it.

My head started pounding and the walls around me spun. Something was wrong with all of this and I tried to tug my hand free but failed.

“I don’t feel well.” If Sebastian heard me, he didn’t stop, instead yanking me with more force through the crowd of people blocking our path.

I tried to tug free again, still with no success, instead careening sideways and slamming into someone among a group coming from the opposite direction. The man grabbed my shoulders to steady me, and I looked up into the eyes I’d spent so many months thinking about. They were definitely amber. Their look of annoyance turned into confusion.

“Dreamboat?” I thought his expression softened at that, but the look was quickly replaced by one of absolute fury and I cringed.

Sebastian tugged at me again, unaware of what was playing out behind him, and Dreamboat turned the full force of his anger his way.

“This boy is drugged.”

Sebastian turned, opening his mouth to deny it, but before he could make a sound, Dreamboat spoke again, this time a quiet jumble of sounds. Words that didn’t seem to be words at all.

Sebastian let go of me and tried to bolt.

He made it exactly three steps before he dropped limp onto the floor.

“Carry that man downstairs. And find out the name of his coven.” This was nothing like the Dreamboat I’d imagined -- a bookish teacher or struggling student -- barking out orders as he was, people moving quickly to do as he asked.

A large man in a dark gray suit hefted Sebastian's body up and over his shoulder, ass in the air, and a woman in a pale satin gown stopped to inquire what needed to be done with the boy. I was the boy. Even as sluggish and foggy-brained as I was, I knew that much.

It was then that I registered that Dreamboat was the only thing keeping me upright.

“I’ll take care of him,” Dreamboat reassured her and she nodded, turning to follow the man in gray. “And Judith, have this hall cleared.”

She did, and soon it was only Dreamboat, me, and two men standing guard at the entrance.

“If you’ll permit it, I’d like to find you a place to rest.” He was back to sounding more like the man I’d met at the store. Quieter, kinder, and as if he carefully chose his words before speaking. “Have someone check you over?”

I wanted to tell him yes. I wanted to thank him. I wanted to devour his lovely mouth. Something about the alcohol and adrenaline, how little I’d eaten in the last twenty-four hours, and probably whatever Sebastian had slipped into my drink, was having a hell of an effect on me.

Instead, I threw up.