Colette deEstaing has adored Gaston, the son of her father’s master of horse, since they were both children. Now grown, she must wed an aristocratic friend of her noble father’s. When her fiancé assaults her in the stable, a savage stallion comes to her aid and kills the dissolute marquis.

That’s when she learns Gaston has inherited the ancient gift of shape-shifting into equine form. Shocked and fearful, she urges him to flee before he is accused of murder or witchcraft. But first she must convince him to take her virginity in one magical night of love. 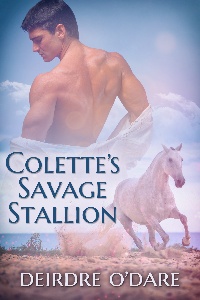 Colette gasped, then whirled when she realized it was Gaston who had materialized at her side. Without thought she leaped toward him, much as she had done as a young child, grasping his shoulders and raising herself to lock her legs around his body. Clearly taken by surprise, Gaston reacted by clasping his arms around her to support her as he backed a step to lean against the solid stone wall of the hut.

Steadied by his strong arms, Colette loosed her grip on Gaston’s shoulders and clasped his head, turning his face into hers to press her lips to his.

“You are going away forever,” she whispered, “I know not how I can bear it but I must. Still tonight you must be my friend again and my love. It is the only chance we will have.”

For a moment she feared he was going to refuse but his hesitation lasted only a moment. With a ragged sigh he crushed her close and returned her kisses with growing heat and ardor. She slid lower down his body and felt his cock harden, seeking her through the fabric of their breeches. Virgin she might be but living among the animals as she had, her knowledge of the ways of males and females was limited only by lack of personal experience. Before the night ended, she vowed that would be remedied.

Gaston lowered her until her feet found the ground but he kept her in his embrace. “I cannot,” he whispered. “It will ruin your chances for a good marriage.”

“I shall blame the marquis for deflowering me and no one will know otherwise. Since we were betrothed it will be almost as if I were a widow. He is not going to be around to dispute it and the servants have all seen him mauling me, heard his demands. Only Papá was never witness to it and thus did not seem to believe my complaints.” She shivered, suddenly recalling the resolution of the problem and why she was here now.

He steered her into the hut. “Come. There is a pallet inside. I will not tup you on the bare ground. A lady of your quality deserves better than that, and so does the only love of my life.”

The passion and tenderness in his tone sizzled through her, igniting fierce itchy tingles in places she had previously all but ignored. Her breasts ached, thrusting against the soft fabric of her shirt, nipples hard and eager. Pressing close to Gaston’s strong body, she lifted one leg and wrapped it around his, stretching to press her crotch against his heat.