There’s a presence in the attic, malevolent, waiting. When Bennie’s aunt passes away, he’s given the task of sorting her things before the estate sale. But the chore that should have been a pleasant visit to the past becomes a nightmare for him and his longtime lover Jordan as the dark presence in the attic seeks a new home in them.

Their once gentle and sensual love turns to a dark passion, hard and rough and hurtful. Jordan sees the change, but will his love be strong enough to save them? 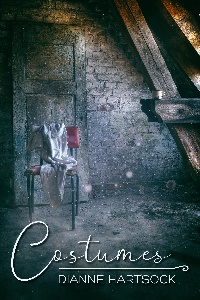 He ran a shaking hand over his hair. What the hell was going on? Bennie had never been timid in his life, and here he was clinging to Jordan like some helpless damsel in distress. Fuck.

"Knock it off," he muttered and jerked his arm out of Bennie's hands. Ignoring his whimpers, he stood and walked out from behind the dresser.

"Where are you, asshole?" he called out, clutching the cane in both hands like a bat. Of course nothing answered, and he paced the length of the attic, his gaze searching the shadows. He sniffed the air. No stench of rotting flesh, so he didn't have to worry about the living dead.

Jordan snorted at the absurd turn his thoughts had taken. Just because the original owners had been from New Orleans didn’t mean voodoo was involved. Passing the dresser he'd had Bennie on earlier, a sudden, burning lust shot through him. He wanted Bennie up there, now!

"Get out of my head!" he cried out. Pain slashed behind his eyes and he reeled back, and stumbled over something on the floor. Discordant notes from the music box jarred along his nerves and echoed in his head. He clutched his hair. "Make it stop!" Pain exploded through his body, dropping him to his knees. He sobbed at the exquisite torture.

Hands touched him and he cringed away, but then familiar arms wrapped around him and he leaned into Bennie's hold. Tremors ran his body and Bennie brushed the hair off his damp face and placed little kisses on his cheeks.

"Let's get out of here," Bennie urged in his ear. Fuck, yeah.

Bennie helped him stand and they headed for the attic stairs. Blinded by the ruthless pounding in his head, Jordan let Bennie guide him. His sight cleared at the doorway, but he pretended otherwise, pulling Bennie along with him out of that crazy-ass room.

They stumbled downstairs and Jordan pulled Bennie into his arms at the bottom. "Thank God you're safe," he murmured, and crushed Bennie's slim body against his. He breathed him in, skin and soap and the hint of musty clothing and sweat. This was Bennie, his lover and best friend. He didn't know what he'd do if he lost him.

Bennie wiggled in his arms and raised his face. "I can't breathe, babe. You okay?"

"Yeah. That music gave me a horrible headache, but I'm better now." Jordan yawned, wrung out. "I feel like we should finish up here and leave as soon as possible, but I’m exhausted. I need to lie down for a bit. Come with me?"

A teasing smile touched Bennie's lips. "Sure you can sleep with me in your bed?"

"Brat. I'll give it a good try," Jordan answered and swatted Bennie's bottom on the way to the bedroom. The unexpected chime of the doorbell gave him pause, and he and Bennie exchanged a puzzled look.

“Who could that be?” Bennie frowned, irritation flashing in his eyes.

Unsettled, Jordan pushed him toward the bedroom. “Go ahead and lie down. I’ll see who it is.”

Bennie glared at the front door, then shook his head in disgust. “Don’t be long,” he warned, and continued to the bedroom while Jordan crossed to the door, not sure he wanted to answer it.