As a rising star on the professional rodeo circuit, Spencer Cole risks his life every night in his quest to become one of the most elite bull riders in America. That all changes on a devastating Fourth of July when a terrible accident brings his future into sharp question.

For five years, Rebecca Rankin's annual trysts with Spencer have been the high point of her Independence Day celebrations, but the timing was never right to seek out more. Now, she's thrust into the role of nursemaid for a bitter, angry cowboy who believes he's lost everything.

But Spencer needs more than a nurse. He needs somebody to show him his life didn't end when his career did. Because courage isn't about how long the bull ride is. It's about getting back up after the ride is over. 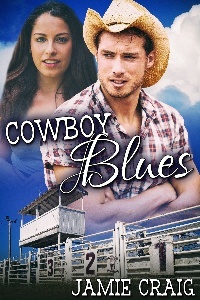 "So how do you like your first year on the circuit?" Conversation. Normal conversation was good. Normal conversation meant she didn't have time to focus on his gorgeous eyes, or how good he looked in his jeans, or the way she sat there, acting like he was just like any other guy she had ever known when he really, really wasn't.

Focus on the conversation. Don't stare at his ass.

"Oh, this isn't my first year. I'm doing more events now because I can actually afford the thousand dollar entry fee, but I started traveling with my Uncle Travis when I was fifteen, and started riding when I was seventeen."

He opened the cupboard above the tiny sink and pulled out a deck of cards, kept together with a rubber band. A bottle of tequila, a shaker of salt, and a lime from the narrow fridge followed.

"Know how to play cards?"

She tried not to stare at the tequila. Lonnie would tan her hide if he found out she'd snuck away to go drinking with Spencer Cole. She had never had anything stronger than beer. Did Spencer realize she was only eighteen? Well, she wasn't going to be the one to tell him. She wouldn't risk getting kicked out.

Rebecca smiled. "Depends on the game."

He sat down beside her, leaving enough room between them for the cards, and balanced the bottle and salt on the windowsill above their shoulders. Leaning across the narrow space, he pulled a shot glass from the drawer.

"Five-card stud. Rules are simple. No cards wild, and the loser takes a shot."

Spencer shuffled the deck, the cards fluttering quickly between his fingers. "You don't trust me?"

"Smart girl," he said, sliding the deck across the cushion. Their fingers glanced across each other as she took the deck away. Squaring the cards in her hand, Rebecca quickly dealt the first four cards -- an eight to Spencer, a king to her, another eight to him, and then a three to her. Her cards weren't even the same color, let alone the same suit.

"You could still get lucky." She set a jack in front of him and a two on top of her three. "Look, all you need is a king, then you've got me beat." She didn't get her king, but she did get another three. Unfortunately, a pair of threes did not beat three of a kind. He winked at her. "Maybe we should have called deuces wild, huh?"

Rebecca scooped up the cards. "So first shot is mine, I guess." She began shuffling the deck to hide the trembling in her fingers. "Is this where I admit to never having tequila before?"

"Not once? I guess I better show you the right way to do it." He took a small pocketknife from his jeans and cut the lime into wedges, careful not to get juice all over the cards. He offered her the first wedge, the rind just an inch from her mouth. "Bite into this."

Rebecca obediently opened her mouth and bit into the green skin, holding it firmly with her teeth. A little of the juice dribble down her chin. She wiped it away quickly as he opened the bottle and filled the shot glass.

She nodded and he took her hand, raising her wrist to his mouth. Rebecca stiffened as his tongue darted out and swiped across her pounding pulse, wetting the skin. Spencer sprinkled salt on the damp patch, and licked her again. The first time had taken her by surprise, but the second time he touched her with his tongue, a jolt shot through her body, making her fingers and toes curl. As soon as he pulled away from her, he downed the tequila, then leaned over and captured the lime with his teeth.

Watching and listening to him suck at the pulp made Rebecca's mouth water. She was pretty sure this wasn't the traditional way of drinking tequila, but hell if she would stop him from putting his mouth anywhere near her body. He'd been so close when he'd taken the lime she'd smelled the aftershave and drying sweat on his skin. How much more would she smell the next time he did it?

Her heart suddenly took off at a gallop.