Cowboys Jace and Macon are happy and in love with their partners Cody and Bailey. They’re busy planning their nuptials, but life can be full of surprises and families can fluctuate in size. Sometimes it’s not just about saying hello, but also goodbye.

As one large extended family, the cowboys and their loved ones deal with the joys and sorrows of life. Through it all they remain strong and whole because when cowboys love, it’s forever. 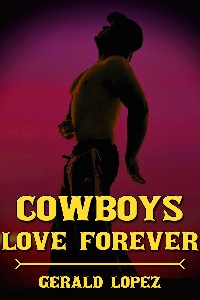 “You drive me crazy, you know,” Jace said. “On a normal day I can barely resist you, so having seen you shirtless and sweaty pushed me over the edge.”

“When I stop working in the middle of the day to give into my lust, it is,” Jace said.

“So, we can’t make this a regular thing,” Cody said. “It was hot having you take the lead, though. I liked it -- a lot. But sorry I can’t start wearing turtlenecks and baggy pants at work.”

“That would still turn me on,” Jace said, then chuckled. “I think maybe I have to avoid your work site.”

“You do have it bad for me,” Cody said and smiled. “I should feel sorry for you, but I like that you react to me that way. And remember, this day started with me saying I wanted to stay in bed with you all day.”

“Can I blame you for putting naughty thoughts in my mind?”

“Yes, but that works both ways. I always have naughty thoughts in my mind when it comes to you.”

Rusty started grumbling in the corner.

“The adult in the room has spoken,” Cody said. “How did you get here, Jace?”

“Macon felt sorry for me and gave me a lift.”

“If you promise to behave, I’ll give you a ride back,” Cody said.

“I’m not sure I can promise that -- can I at least nibble on your neck a bit and hold your hand?”

When they finished work for the day, they showered together, then got in bed to have some fun. Afterward, they went downstairs and made dinner while Rusty watched. When the food was done, they talked about their day.

“It’s nice that Matt’s sister is carrying a baby for him and James,” Cody said.

“Jace, have you ever thought about having kids?”

“Not really. It just didn’t seem like a very real possibility for me. What about you?”

“I never thought about it either. Pops did have cancer and I wouldn’t want to pass that gene down to kids. But ...”

“You can tell me. We’re best friends as well as lovers, aren’t we?”

“Of course we are,” Cody said. “It’s just so dumb. I never really thought about having kids until I heard Matt and James were expecting.”

“Then what did you think?” Jace said. He smiled when he saw Cody hold his head down bashfully. “What is it, bud? C’mon now. Do I have to lasso you, then tickle the truth from you?”

“No,” Cody said. “It’s just that when they mentioned the baby a picture popped -- no, flashed through my mind.”

“A picture of what?” Jace said, then took a bite of his food.

“Of a cute little cowboy -- a junior Jace with his pint-sized cowboy duds and hat on.”

Jace laughed, then put his arm around Cody’s shoulders.

“Ridiculous, I know,” Cody said. “But he was as cute as his daddy. And I kind of liked the idea of having a mini Jace to raise with you.”

“We do already have a baby named Rusty,” Jace said. “Besides, who has a kid at fifty?”

“Some male movie stars have kids when they’re older than that,” Cody said.

“No,” Cody said, “you’re a cowboy and that’s even better. But for the record, I didn’t say I wanted kids. I was just sharing what popped into my mind with you. Did it scare you?”

“Cowboys don’t scare easily. Although an ugly thought did pop into my mind.”