Jenny Rohm thinks she has it all -- a job she loves, an engagement to her high school sweetheart, a future bright with promise. Then she meets attorney Ashley Edwards and discovers desire doesn't care how settled your life might be.

It starts with a single fantasy. His. Hers. One leads to two, two leads to three, three leads to more. Fantasizing about his wicked mouth or her sinful curves doesn't satisfy either of them for long, though. The more Jenny gets to know Ash, the less she can deny the truths he insists on exposing.

The question remains ... is it worth risking everything she has to quench the cravings? Not even Ash can give the answer to that. When it comes to what she wants, only Jenny can make the choice. 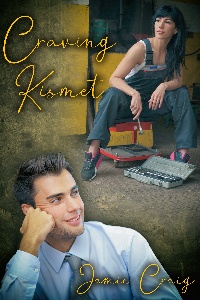 "Did you say you were hungry?" Jenny tilted her head back toward the kitchen, the end of her long ponytail tickling down her back. "You're welcome to stay if you want. It's just a veggie stir-fry, but I really do have enough for two. And I can put on some coffee, maybe help you sober up a bit before going out on the roads again."

Jenny thought that Ashley wouldn't hesitate -- he'd either leave or he'd stay, but he would make his decision quickly. He didn't disappoint her. He ran his hands through his hair, brushing the long strands out of his blue eyes. "Thank you. We didn't get a chance to eat tonight. Unless you count pretzels as food, I suppose."

She was all too aware of him following her into the kitchen, and while Jenny had never thought of it as a small room before, suddenly it seemed incredibly cramped, the air hot from the stove, the counters too close as they navigated around the tiny two-seater table. She gestured toward a nearby drawer. "Forks are in there." She didn't look to see if he was getting them. It was taking everything she had to try and not pay attention to the rush of heat along her skin.

Her hands were busy dishing out the food onto the waiting plates. "You like what?"

"Your jeans. I like them better than your dress."

The spoon clattered into the wok as Jenny jumped at the obvious appreciation in his voice. Her heart thudded at the thought of him checking her out, but when she glanced back, his amused eyes were on her face, not her ass, waiting for her to respond.

She swallowed. "That's because I'm more comfortable in these," she said to try and explain the compliment away. "My work's not nearly as dressy as yours or Bryan's."

He tilted his head. "I don't think Bryan mentioned what you do."

"I'm a mechanic. Classic cars, mostly." This was better. Normal conversation. It made it easier to turn her back on him to pick up the plates. "Well, not just a mechanic. I do a lot of bodywork too."

"Bet you're good at it," Ashley murmured, almost inaudibly. When she looked up again sharply, he merely smiled. "I've got an old Ford truck that looks its age. Maybe I can bring it by your shop?"

Bad idea, a little voice said at the back of her head. Bad, bad, bad idea.

But the thought of this impeccably dressed attorney driving an old truck intrigued her. It certainly was in keeping with the Texas boy background he'd presented.

"I suppose I can give you a card to the shop." Jenny's mouth canted into a half- smile. "Who would've guessed my card would be used before yours?"

"Do you still have my card?"

She carried the plates to the table, setting them down before turning back to make the coffee she'd promised. It hid her flushed cheeks from him, because Jenny knew exactly where his card was. Tucked inside her wallet behind a coupon for a free scoop of ice cream from Baskin-Robbins.

Ashley smiled at her like they were sharing a particularly amusing joke, but he let the subject drop. He sat at the table, handing her a fork as she passed him the plate. "I was thinking a deep red."

Her mind raced. She had to stay focused on the conversation. He was talking about the bodywork he wanted done, not something ... else.

"Why red?" Slipping into the chair opposite him, Jenny picked up her fork and dug into the stir-fry. Her hunger had fled, but she didn't want him to see how his presence affected her. "Because it's supposed to be a power color? I didn't think you'd care about that kind of thing."

"Because red looks less ridiculous on an old Ford than purple does."

There was no mistaking his amusement this time, and Jenny laughed in spite of her tension. "Score one for the suit." She saluted with her fork. "But for the record, black looks even better."

"Black is drab. I'm not driving a hearse, after all."

"Black is sleek." She took a bite, chewing without looking away from him. "Sexy."

Ashley speared a vegetable with his fork. "So is red."

"The only guys who pick red are the ones who think they need to prove something."

Jenny smiled at his quick acquiescence. More and more, she was learning he was a man who picked his battles wisely.