Hell’s Kitchen private investigator Jimmy McSwain returns in a twisting tale of past sins and present-day vengeance. Jimmy McSwain isn’t thrilled about taking a case for free, but when his sister fears her boyfriend Rocky is cheating on her, he has no choice.

But the case takes a deadly turn when he finds Rocky standing over the body of a man he was just seen kissing, and he’s holding the gun. He begs Jimmy to prove his innocence. Meanwhile, as a sweltering heat wave claims New York City, a gunman with a thirst for blood is targeting Manhattan deli owners and has already claimed two victims. Jimmy knows a thing or two about those. Fourteen years ago his father was killed outside a deli, and it’s possible today’s killer could be linked to that unsolved murder, one that forever haunts Jimmy.

Enlisting the aid of sexy NYPD Captain Francis X. Frisano, Jimmy finds himself torn between the two cases as the heat simmers between himself and the hot cop. Suddenly a quiet summer has erupted into a full-blown Crime Wave. 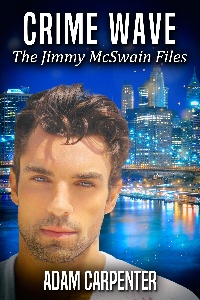 Smithwick’s was Jimmy’s choice lately, and the friendly barkeep poured it good and fast.

They clinked glasses, cheered. Jimmy watched his unsteady hand, filed it away.

It was his usual refrain. “Men, Ralphie, I like men. And yes.”

“Well, you should try happy on for size, some people like how snug it can be.”

Again, Jimmy found himself thinking of Frisano, and what tonight might bring. Frisano’s suggestive comment about kissing him had lived within himself for two days. It was an itch he wanted to scratch.

“So, what made you think of me, Ralphie?”

“Saw the news. Deli murder. Thought of your father, I bet.”

“I dragged out the file, laid it all out on the floor the other night.”

“Let me guess, you came up empty.”

Ralphie turned to him, sparse eyebrows thickening with curiosity. “Do tell.”

Jimmy explained his theory, the same one he’d told Frisano. “I’m waiting to talk with Roscoe and Dean, of course, they’re the lead detectives. They don’t like to share, but I think Captain Frisano can aid me if they try and stall. I mean, I know deli robberies are common, but this one…I don’t know, Ralphie, there’s something about the sketch of that guy. Like my fourteen year old eyes recognize him. Could my father’s murderer have been in jail all this time for something else? Is he back, operating under his usual M.O.?”

“The bad guys do tend to repeat themselves. They’re not very smart.”

“The truth, Jimmy, lives in dangerous places. We don’t need you sacrificing yourself for something you couldn’t control.”

“What’s that supposed to mean?”

“Joey’s been gone a long time. You’re still here. We’d like to keep it that way.”

“Me, your mother. Probably one of those boys you like so much.”

“I know, I know, just yanking on ya. You gotta ease up, Jimmy. Smell the roses.”

“But don’t get pricked by their thorns while doing so.”

Jimmy went to lift his glass, but Ralphie held it back. He pointed at the half-empty beer. “What do you see?”

“Getting ready for summer. Show closed yesterday. She’s going to the lake.”

“Ah, to see the irrepressible Hester. And you?”

“Geez, what don’t you know, Ralphie?”

“I’ve got feelers still out there in the NYPD and beyond,” he said. “You be careful on this one, Jimmy. That Martino kid was trouble before he was born. Probably held up his mother’s womb. Fights, drugs, prison, now a murder charge. Being behind bars changes a man, it makes you see the evil in this world. Murder’s just a logical next step. You sure he’s innocent?”

“Normally, I wouldn’t take Rocky’s word for anything. But I was there and saw his eyes, right after it happened. It’s like a locked room mystery, Ralphie. Someone else was already there, and they slipped out so fast ... it’s like ... wait a minute. How did the killer know Duvan and Rocky were headed to that bar? Because he must have known it already and been lying in wait, ready to strike. He wasted no time in getting the shot off. They’d only been inside the bar two minutes, five at most. Duvan’s murder was premeditated.”

“I believe we call that a lead,” Ralphie said with a knowing smile.

Jimmy nodded, his mind churning with new possibilities, new clues. He drank from his beer. “I knew talking to you would help. Next one is on me.”

“That sounds about right,” Ralphie said, “and while we share a last drink today, what say you tell me what you think you’re doing running around with that Frisano character. Talk about trouble, he’s up everyone’s ass in the NYPD. Find the word ambition in the dictionary, you’ll see his face. Word is, he won’t settle till he’s commissioner. Corruption is his bag, he hates bad cops. Gonna take a string of bodies along with him if that happens, and those won’t be breathing.”

“My interest in Frisano is purely professional. He can help me.”

“All while he’s helping himself. But don’t fool an old fool, I see your eyes dance when I mention him. He one of those men you like?”

Jimmy was trapped on this one. “Shit, Ralphie, I haven’t even been on a date with him.”

“Fine, do what you like. Just remember one thing. Frisano is a cop first.”

Jimmy checked his iPhone. His date was eight hours away, and the clock was ticking. He was grateful when the second round arrived. Drinking down that first gulp shut Ralphie up, at least for a bit. Jimmy enjoyed the silence. Words, Ralphie’s words especially, had a tendency to sting.