Dance Until the World Ends (FF)

Lina and Arabel are just a couple of gals on the lower rungs of society's ladder. Born into a culture with rigid caste system, all they want to do is find the next good party. Never in their wildest dreams would they suspect the survival of their island colony might rest on their shoulders. But things come to a head when the ever seething rebellion pushes the two women into the spotlight and into danger's path.

With their own colony no longer safe, these best friends find themselves on the run, fleeing with only the clothes on their backs. Their journey into the unknown leads them to discover strange new lands, never before visited, some with even stranger inhabitants than their own. Will these newfound acquaintances prove to be friend or foe, or simply another temptation from the path?

Follow Lina and Arabel on a hero's adventure of epic proportions at the far distant edge of humanity's future. Sailing over the clouds, risking everything to do what is right for their people and their colony. 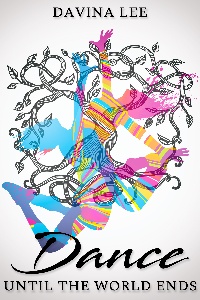 Dance Until the World Ends (FF)

The woman was still there, but hazy.

She looked familiar, but yet unlike anyone Lina had ever seen. She was all at once beautiful and completely foreign, repulsive almost. Her skin young and taut one moment, and covered in deep wrinkles the next. The woman's eyes were like tiny teardrops turned sideways, always bright. Her face round with cheeks high and rosy, her nose impossibly small. It was a wonder she could smell anything at all with a nose like that. And then Lina noticed her most revolting feature yet. The woman had no scent glands.

"Where are we? Who am I? ... Or perhaps you'd like to vomit again," the woman's voice echoed as a sing-song melody inside Lina's head, but with shrill, skull-rattling overtones. "Makes no difference to me. It's your dream after all. But ... once you wake up ..."

The strange woman brought her two closed fists up, one on either side of her head, and then suddenly splayed all of her fingers out at once. She made such a wooshing noise to accompany the gesture, that the result was Lina feeling her face being covered in a fair amount of spit.

But when Lina reached up to wipe with the back of her hand, she felt nothing there.

The strange woman's face began to change in front of Lina's eyes. For a long moment she held the face of Mentor, and then Arabel. In quicker succession came the faces of I, and the twirling woman from the rave, a woman covered in tattoos who she had never seen before, and finally the gnarled face of the old queen from Lina's colony.

"Well, of course not, child. You refuse to open your mind. You look right at me every day, but you don't see me." The strange round face was back now, the younger version, then the old. "I am all of them, and they are all me. Except for that last one. Not quite sure where I went wrong there. Well, never mind." The woman waved her hand in the air.

Lina held her hands to her temples and doubled over with her lips pressed in a tight line.

"Sorry, too much," said the voice. "Perhaps this."

The old woman was gone. In her place stood The Great Tree. Not the tree surrounded by the palace walls in Lina's colony, but something else, something larger both in size and in presence. The branches of the tree were old and gnarled like the old woman's face, but its leaves and flowers were as young and vibrant as the sapling that Arabel kept hidden away in her apartment. A half-round orange sun was rising on the far horizon, casting long shadows of branches over the ground.

"Ah yes, the next question already. You know, most people take a little more time to get their minds wrapped around the 'not a tree, the tree' bit. I think it fell rather flat this time, don't you?"

Lina grimaced and rubbed her temples.

"We are in a place once known as Mother Africa, specifically Sub-Saharan Africa, just south of a little waterway that in its prime, came to be known as the Zambezi River. And I'm sure you have no comprehension of any of that, do you?"

"The air is so clean and clear. How can it be, so far into the abyss?"

"This is the way it was when my human children first came to be. See us right over there? On that plane? I'm the big tree, obviously. Hello. And all around me are my human children. See how they love me?"

Lina squinted and looked at the figures surrounding the Great Tree. They were very different than Lina, even different from the old woman she first saw in this strange fever dream. They were dancing and singing.

"This is where my people came from?" Lina asked.

"Yes. And no." The image of the lone Great Tree on the wide, flat plain disappeared into the mist, and the young woman's face who first greeted Lina appeared in its place. "Your most direct ancestor is the one they call the Wise Queen of the East. Come. I will take you to her land."