For Nelson Benjamin, former juvenile offender, seeing Mara Lontez, an alien come to Earth in a role to do good, in action, is one thing. Meeting her is another, and running from the law, well, that’s a different story altogether.

Nelson Benjamin, eighteen, the owner of a criminal record who only wants a fresh start in life, is given his chance by Mara Lontez, an alien come to Earth, and also by a shadowy government agency known as the Agency that Mara works for.

Mara has super-powers, and Nelson finds himself in the position of being her confidante, her guide to human life and its ways and mores, and eventually, her boyfriend. Serving truth and justice and whatever else comes with it, Nelson does his best to help Mara fit in.

However, as with all things, agendas rule, and he discovers that the Agency isn’t what it seems and its goals under its leader, Colton Samel, differ wildly from its stated purpose. By the time Nelson and Mara discover the truth, it may already be too late. 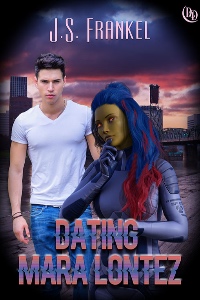 Sweeping up leaves and hauling trash away wasn’t my first choice of things to do. In fact, if someone had given me a list of things that constituted sheer drudgery, then cleaning up a park would rank dead last.

However, it was that—or prison—and no way would I ever go back. Been there, done that, and if picking up garbage kept me out of lock-up, then that’s what I’d do.

Nice compliment—jailbird. Said comment came from Larry Landon, my middle-aged, fat and slovenly overseer du jour, and the only person who’d given me a job after I’d aged out of foster homes and then after my unfortunate incarceration.

Since he was my boss, I had to do what he said, or else say hello to the street and add in a lot of less-es—jobless, homeless, and needless to say, friendless.

Oh, wait, I was already friendless. That left jobless and homeless, two prospects not worth looking forward to.

“Yes, sir,” I answered, mustering up my friendliest voice and hating every second of it. Play nice, play nice…why? Because you need this job, that’s why!

With my trusty pick, I speared a few crumpled cans, some paper, and two—ick—used condoms. I shoved the cans in the non-burnable plastic bag I carried with me and put the paper and mini-hats in the burnable bag. They’d be collected later.

It was a nice day, sunny and warm, but I took no joy in it as I cast my gaze around the area. Garbage was strewn everywhere. Couldn’t people use the trashcans?

Rhetorical—they couldn’t, or they didn’t want to, hence good ol’ me doing their job for them. Tomorrow, I’d clean up another park or an apartment building. That was the deal.

While I worked, I mentally kicked myself for getting into this mess. Exactly fifty-seven days and an untold number of minutes ago—that’s how long it had been.

Yeah, I’d hooked up with some losers. My bad, my idiocy…my fault. They were older than I was, in their late twenties, and me, eighteen, just out of high school and kicked out of my foster home for fighting with their favorite son, I had nowhere else to go. No cash, no future—in short, I was broke and desperate.

In a donut shop one day, I sat staring out the window when this big, bearded, tattooed dude walked in with another smaller man. The bigger guy carried a plate with one chocolate donut on it, and he placed it in front of me. “Have this.”

What was this, a pickup? Uh…no thanks. “I’ve got my own,” I said, pointing at my half-eaten donut. It was stale, but better that than nothing at all.

If it involved something sexual, forget about it. “I’m not looking for a good time. Try someone else.”

He chuckled. “I’m not into that, either. What’s your name?”

“Okay. Listen up. I’ll make it worth your while.”

Long story short, he pulled up two chairs, sat with his friend, and in a quiet voice, he told me about making some easy money. Sure, it involved something illegal, but since my cash flow was nonexistent, greed outweighed caution.

“It’ll be easy,” the ringleader said. By now, he had a cigarette working. The bluish-gray smoke covered us, and it made me cough. I hated the smell, but for the sake of amity, I said nothing.

Our table near the window offered a perfect vantage point to map out our target—Ernie’s Electronics. Lots of people came out carrying big boxes. That meant beaucoup bucks.

According to George—we went on a first-name basis, only—there were a lot of employees at Ernie’s, but only one night-watchman and two security guards.

“First off, the place does good business. See all those people goin’ in and comin’ out? That’s what it’s like pretty much every single day.”

Brad asked, “What about security?” He was the second man in on the job. I was the third.

George glanced at the store and then at him. “It’s light. Like I said, there’s one night watchman, some old guy. There’s just two other security guards, and we can handle them.”

Mr. Ringleader inhaled mightily on his smoke and then blew a perfect ring at the ceiling. “We got disguises. I stole some of their cleaning uniforms. When they come in to clean up the place, we take them out first, then enter. No one will figure it’s us.”

George shot him an annoyed look. “Yeah, it is. Anyway, we go in, clean up, and then wait. The employees always leave first, exactly at six. The owner’s next, and after he locks up, the night watchman and the security guards check -in.”

He downed more coffee. “I know their schedule. The owner always leaves the cash inside. Friday’s his banking day.”

George speared him with a vicious glare that made Brad, all of five-four and one-hundred-thirty pounds of skinny nothingness, wilt. “Just who’s doing the planning here, Brad?”

George calmed down enough to add, “So, we’re already in uniform. Once the store’s locked, we take out the night watchman or the security guards—whoever comes first—tie them up, and then grab the money and leave. Simple.”

He knew the ins and outs of casing and then robbing places—or so he said. In his mid-thirties, he’d had experience.

In retrospect, I shouldn’t have hooked up with a guy who wasn’t remotely competent at robbing places. After all, he’d been in jail twice, so that should have been a dead giveaway right then and there.