Tom and Santino’s anniversary is coming up, and Tom has a plan. He’s going to show Santino how much he means to him. The night will be magical.

Tom’s plan did not include a trip to Thailand. He doesn't do aeroplanes, doesn't do tropical climate, and he doesn’t do spas. Yet he finds himself without a stitch of clothing on a spa table, with a man he's never met before while Santino is away on a business meeting.

This was not how it was supposed to go. Tom will do his best to live through the day so they can celebrate their anniversary when they get back to the hotel, but If Santino wanted him smooth and sparkly, couldn’t he have told him instead of booking him an appointment? 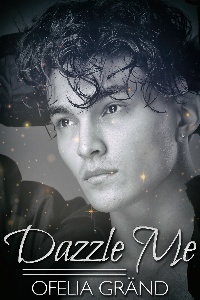 The smell of the plane had my stomach in knots. How did they always manage to make it smell like that inside the air cabin? It was odourless and yet it had a tinge of disinfectant to it.

“You want the window seat?” Santino’s eyes were filled with concern as he watched me over his shoulder. Window seat or the seat one step closer to the middle of the row -- I could hardly see that it mattered. “It’ll be fine, Tommy-boy.”

I growled. He knew not to call me Tommy-boy -- never ever when other people could hear.

“We’ll be there in no time. Let’s see if they have a content filter on their Wi-Fi. Maybe we can watch something fitting for our tastes.” He gave a wicked smile and wiggled his brows.

“Quiet.” I glanced around the cramped plane. It was huge, but still cramped with all the people squeezing themselves into their seats. “Pick your seat and keep your mouth shut.”

“Oh, you’re letting me choose?” He squealed like a schoolgirl and waved his hands, making more than one person turn around and gawk at us. My lips stretch into something that probably was closer to a parody of a smile than a real one, but it was all I could muster at the time.

“It’ll be okay, love,” he whispered and patted my arm, the corner of his mouth quirking. “Sit by the window. Maybe the view will take your mind off things.” I wanted to scoff, but it wouldn’t do any good, so I sat down at the same time as he slumped in the seat next to me. He leaned toward me. “It’ll be all right, I promise. I’ll save you from all the big bad co-travellers.”

“I’m not worried about the travellers.” My jaw ached from all the clamping I’d been doing.

“Argh, I wanted to save you, be your knight in shining armour and all of that.”

I caught the annoyed glare the traveller next to Santino sent in our direction and shook my head. I knew he was trying to distract me, but the rapid beating of my heart made it impossible for me to indulge him. Why the hell had I agreed to this? Why did I have it in my mind that I needed to propose on our anniversary? Three hundred and sixty-five days a year, and I had to propose on the twenty-second of June.

I tapped my foot. I hated when people tapped their feet. The roar of the engines rumbled through the plane, and I grasped the armrests. I hated that sound. My fingers clutched the grey plastic in a bruising grip. I was an embarrassment to all mechanics, but I couldn’t help it. Cars were one thing, planes entirely another. As my knuckles turned white, I closed my eyes. I tried to ignore the roar of the engines, pretended I couldn’t smell that distinct air-cabin odour, tried not to see the blue seats on the inside of my eyelids. I concentrated on my breathing. In and out. In and out. I’m in a car, a beautiful car. In and out. In and out.

I sensed the plane turning, knew it meant that we were out on the airstrip. Soon the plane would start to go faster, and faster, until it lost contact with the ground. I’m in a car.