They were five misfit kids who banded together in their small Ohio River town. Over the years, they had organized various clubs, and now they form the Halloween Horror Club. The premise is simple: each week, each teen would spin a horrifying tale, and at the end of five weeks, the scariest story wins a prize.

The twist: the stories have to be told in the infamous and abandoned Tuttle house where, fifteen years earlier, an entire family was murdered in their beds.

The idea seems like a good one at first, until the kids realize they may not be alone in the house. Is someone -- or something -- watching them? Maybe it’s Paul Tuttle, the teenage son who survived the murders only to disappear the night his parents and sister were killed. Or is it someone even more sinister?

With each story, the tension mounts ... and so does the anger of the house’s mysterious inhabitant. He’s enraged at having his space violated. And his rage could mean a real dead end for those who dare to invade his home ... 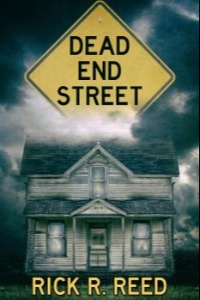 "Thanks," Peter said. "Anyway, what I was thinking was this: it's only six weeks until Halloween, right?"

Erin nodded and flung a mass of her dark brown hair over one shoulder. She gave Peter the full attention of her eyes, which were so dark they appeared bottomless.

"Well, what we could do is meet officially once a week. At that time, each one of us would be responsible for making up a scary story ... you know, something really gross or bloody ... for that week. When we're all done, we'll take a vote and whoever gets the most votes gets to decide how we'll spend Halloween."

"Boring!" David said. "Can we move on to other business, like putting some other music on? This sucks."

"I think the idea has potential," Marlene said.

"I didn't tell you guys the best part, though." Peter's face flushed red with excitement. "We'll meet at the Tuttle house each week. That's where we'll tell our stories."

The group got quiet. Even the music seemed to get softer, as if an unseen hand were turning down the sound.

"Isn't that where all those murders happened? That family?" Roy's voice cracked.

"Supposedly." David spoke up. "That was a long time ago, before any of us were even born. I think it's just a rotting house up on the hill. Nothing to be scared of."

"Then we can do it?" Peter sounded hopeful.

"I haven't got a problem," David said.

"I don't know," Erin twisted a strand of her dark hair. "What if someone catches us?"

"Who's going to catch us?" Marlene spoke up. "The house is at the end of a dead end road; there aren't even any neighbors until you get to the Washingtons and they're at least a football field or two away. If we're quiet, I don't think anyone would even pay any attention. It's just an empty old house, really."

Peter looked around at them all. "An empty old house? Maybe. That's part of why I want us to meet there ... to see just how empty it is. I've heard things, lots of things about the Tuttle house." His gaze met Erin's, who had gone pale. "It may not be as empty as some people'd like to think." He grinned. "Or hope."