Eliza Quinn first meets Ford when he tracks his rival Corbett to her homestead. Ford recruits Eliza to his fight, and they defeat Corbett’s attack, but her homestead is lost in the process.

But when they travel to the frontier’s closest town, Dead Man’s Corner, they face Corbett’s brother Ben, a ruthless man with powerful friends. He plans to exact his vengeance against Ford, and destroy anybody or anything who stands in his path.

Despite the danger to herself, Eliza can’t turn her back on Ford, and is caught up in the fight to the bitter end. Will she win the fight for her future ... and their love? 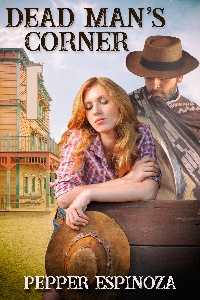 “Why did you agree to do it, Ford? Why not just ride on through to Santa Fe? Was it just for the money? Surely Corbett’s bounty ...”

“Well, I’m glad I found out now then,” Eliza said, turning away from him. “I’m nothing more than a burden to you. It’s best if we part company now, I think.”

Ford gripped her shoulder, forcing her to spin around and face him again. “You are not just a burden to me, Eliza.”

“Right. Of course. I know what else I am to you. I’m sure Clara would be happy to take my place when I’m gone,” Eliza spat.

“Do you think if you were just a burden to me that I would have come back for you? I could have easily left you to fend for yourself.”

“It’s nice to know that you’re such a noble man.”

“I never claimed to be noble, Eliza.”

“No, of course not.” Her shoulders slumped. “I don’t know what I thought ... what I was thinking. California. Can you imagine?”

“You’ll never make it to California, Ford. There are too many towns like this one standing between you and your ranch. And I don’t think I can ...” Eliza tried to smile, “But of course, I planned to go to England anyway, right?”

“Eliza, don’t go to Silver City by yourself. There are bandits and robbers all along that road. Wait for me.”

“But what if something happens to you. What if Pierce’s men shoot you in the back? What if they work you over? Should I just stay here?” Eliza demanded.

“None of that is going to happen. I know what I’m doing.”

Eliza looked down at the finger still gripping her shoulder. Her skin burned where he touched her. What was she going to do when he wasn’t around to touch her anymore? Eliza didn’t know what she was thinking or feeling. She wanted to believe he knew what he was doing, because the thought of him injured or dead was too much for her to bear. She wanted to wait for him, because she didn’t want to leave him. She knew she needed to go home, but she couldn’t stop thinking about California.

Ford cut off her words with a gentle kiss. His warm mouth brushed against hers, as delicate as a butterfly’s wing. The restraint he showed surprised her, but what shocked her was the need she sensed just below the surface. She knew he wanted to take her by the shoulders, push her against the wall, and devour her mouth. Instead, he teased her lips, pulling a response from her that she didn’t want to give. She didn’t want to kiss him back, she didn’t want to curl her fingers into his strong arms, or press her body against his solid chest. But she couldn’t withstand his slow, measured assault on her senses.