Attending the dinner party thrown by his father, Ed Newton, to celebrate his sister's engagement seemed like a fine idea to Mick and his lover, PI Trent Taylor. Even a snowstorm didn't dampen the spirits of everyone attending, despite the fact it soon turned into a raging blizzard.

Everything would have gone as expected -- until the power went out during dinner, trapping the guests in Ed's penthouse condo. Even that would have been surmountable if James, the father of the future groom, hadn't died suddenly, soon after dessert was served. At first glance it seemed to be a heart attack brought on by a severe case of food poisoning. Trent wasn't so certain that was the case, but with no proof otherwise, he kept quiet other than to tell Mick why he believed it could be murder.

The death, and the blizzard, definitely put a damper on the festivities. Then a second person dies, and this time the circumstances are decidedly suspicious.

Will Trent be able to prove what he believes, that someone at the party is a killer, before anyone else dies? Only time will tell. 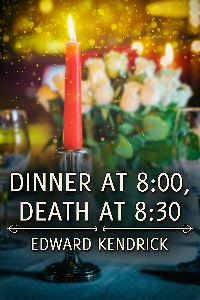 When everyone was seated, Ed at one end of the table, James Leonard at the other, Ed lifted his wine glass. "Congratulations on your engagement, my dearest daughter. And to you as well, Dirk."

Mick stood, glass in hand as he bowed to his sister and her fiancé. "As the brother of the soon to be bride, may I say you made a wise choice in asking her to marry you, Dirk."

"I agree," Adele and Dirk replied at the same time, getting laughs or chuckles from the others.

With the toasts taken care of, the platters of food were passed around so everyone could take what they wanted, and they began to eat. There were comments on how good the food was, and varied discussions between guests seated next to each other about work, vacation plans for the summer, and why there was a blizzard at the beginning of March in a city known for its clement weather even in winter.

Suddenly, every light in the condo went out with the exception of the candles and the fire. That elicited gasps from several of the women, and soft swearing from Ed as he got up, telling his guests he was going to check the circuit breakers.

"Don't bother," Trent said, pointing to the windows. Even through the heavily falling snow it was apparent that the whole block across from them was dark. Most of the guests went over to the living room windows, only to see that it wasn't just the local area which had suffered a power failure. No lights were visible anywhere in any part of the city that they could see through the snow as they looked out the west and south facing windows.

"Citywide blackout," Hank said, pointing out the obvious. "Let's hope it doesn't take forever for it to be fixed."

Vera hustled into the dining room, carrying a lit flashlight and a box of candles. She put the candles on the sideboard, then told Ed, "I checked the circuit breaker box and that's not why the electricity is out. At least we'll have heat of a sort with the fireplace, and the stove because it's gas, not electric. So ..." She put her hands on her hips, looking at everyone.

At that point all of them, with the exception of Ed and Izzy, were standing at the windows, staring morosely out at the storm. Vera shook her head, took four more candlesticks from a drawer in the sideboard, put candles in them, and moved around the table, putting them down between some of the wineglasses and then lighting the newest candles. "There. That's better. Now sit yourselves down again, and eat." she said loudly enough that everyone could hear her. "There's no sense wasting good food. It won't make the storm go away and you'll feel better on full stomachs."

"Words of wisdom from the lady who knows," Mick said, getting a smile from her.

They finished eating. With Mick's help, Vera cleared the table before bringing out dessert -- an ornate cake decorated with icing flowers and the inscription 'Happy Engagement, Adele and Dirk! May your future be all you dreamed.'

"It will be," Dirk said, giving Adele a hearty kiss, which she returned with equal fervor. "Now, let's demolish the cake." He handed her the serving knife which she used to cut the cake into fifteen slices, one for each guest and the last for Vera, after insisting she join them.

Despite the circumstances, the mood was generally upbeat as everyone dug into their dessert. That is until James leapt from his seat, racing madly to the half-bath off the dining room, not bothering to close the door before bending over the toilet, vomiting harshly. Karen was beside him seconds later, rubbing his back while looking in panic at Ed and Dirk who came in right after her.

"What's wrong?" Ed asked, although it was obvious James was sick as a dog.

Wiping his mouth on the washcloth his wife handed him, James started to reply before doubling over, holding his abdomen, and then vomiting, again. Finally, he was able to say, "I don't know. It hit me like a Mack truck." He stood, with Karen's help, and then rinsed his mouth out at the sink. "Must have been something I ate, but ... "

"Not to put too fine a point on it, but if it was, why isn't anyone else sick, because no one else is, right?" Trent asked from the doorway, looking at the other guests, all of whom indicated one way or another that they were fine. "Do you have any food allergies, James?"

"No." James shook his head vehemently. "I need to lie down before I fall down."

Ed put his arm around James' waist. "You can use one of the sofas in the theater until you're feeling better."

They had barely gotten there when James doubled over again, although he didn't vomit. "It hurts like hell," he managed to get out before collapsing on the floor next to sofa, his eyes rolling back in his head.

"Someone call 911," Dirk shouted as he tore off his father's tie, pulled open his shirt, and started to perform CPR on him.

"Won't do any good," Mick called back. "Even if they could get to the building, they couldn't get up here. With no electricity the elevators won't work."