Disciple of the Undead

The city of Boston has a new infection, the Tribexx fandom. Tribexxers imitate the perverted and cruel lifestyle of the Tribe of the Undead, the mythical sex-cult zombies that capture humans to use as sexual servants. Its all fun and games, they say, because no one actually gets hurt.

Reluctant rich kid, Nidhi Bansal, made some mistakes. Now out of rehab and in a prestigious graduate program, she’s walking the straight and narrow path to a respectable professorship. Hooking up with a tantalizingly dangerous girl who seems to have two things Nidhi wants—sexual adventure and inside information—rapidly goes from difficult to dreadful. Nidhi’s research and relationship drive her deep into Boston’s most deviant crowd, a group of elites who do not want to be disturbed.

In a city that thrives on wealth and power, everything is up for grabs. 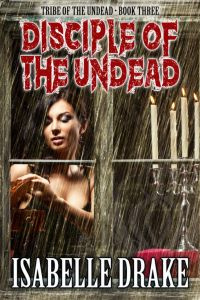 Disciple of the Undead

Nidhi set down her bag, forced her hands to stay loose by her sides, then in a lame attempt to look casual, leaned against the door. When the other girl’s intense gaze became too much, she turned her own to the window. The storm had softened to a drizzle, but the clouds were so thick the sky was a haze. “The lady is bound to pop back in here. She must’ve had a reason for texting me.”

“I texted you.” Mattie held Hume’s phone in her long, pale fingers. “Don’t look so surprised, baby.” She shimmied, making her huge breasts jiggle beneath the tight white t-shirt, then mimicked a body check. “It was a simple matter of bumping into her in the hall and snatching her phone out of her bag. That woman should get her shit together. She runs part of this very serious newspaper. People depend on her.” She opened her palm, and the phone fell. The device landed near the edge of the desk, teetered, then dropped to the floor with a soft thud. “I must say, you look awkwardly sweet all wet like you are.”

Nidhi waved one hand toward the door. “Want to get out of here? Go someplace?”

Now the rain had completely stopped, the sky was still with a greenish hue. Bleak clouds hung high in the sky, a thick band of foreboding.

Mattie made a deliberate display of uncrossing her legs, then recrossing them, the flex of her muscles and the roll of her hips an intimidating seduction. “This desk is solid. I like that. A solid desk that can take a beating is important.” She swung her leg, kicking one of the legs with the heel of her boot. “We’d expect this sort of high-quality furnishing from Hume, right?”

“I guess so,” she replied, even though she had no idea what Mattie was getting at.