Cass Davison is the woman of his obsession. She's beautiful, bold, and his best friend's girl. The last thing Patrick should do is challenge her in blackjack, and the last thing he expects is for her to agree to his terms.

If he wins, he finally gets a taste of her.

But if he loses ... well, Patrick isn't thinking about that possibility. Because he's waited a very long time for this chance with Cass, and it's worth risking everything he has to get it ... 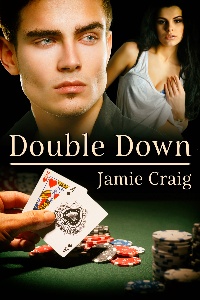 "Did you two have fun this afternoon?" Whitney asked, as they were waiting to be shown to their table.

Patrick smiled. "I think somebody won't be talking so big from now on."

"I think somebody just got lucky," Cass shot back.

Cass was saved from responding by Whitney losing interest in the conversation and launching into a litany of things she wanted to see and do over the weekend. Patrick had heard it all before, so he nodded and made all the right sounds of agreement. He watched Cass and Ronnie from beneath his lashes -- Ronnie, as always, was very affectionate. Holding her hand, cracking jokes, teasing her about throwing her into the pool.

They were shown to a corner booth. Patrick made it a point to sit beside Cass, which put him between her and Whitney.

"So dinner's on Patrick for being the big winner today," Ronnie announced. He twisted to scan the buffet tables that rimmed the large room. "Now do I want to start small and work my way up, or get the good stuff first, just in case they run out?"

Cass snorted. "This is Vegas. It'll never happen." Patrick would've sworn she glanced at him before picking up the drinks menu to look it over. "This is the one place in the world where you can never get enough of a good thing."

"It certainly seems to cater exclusively to gluttons," Patrick observed. "What do you think, Whitney? Where should we start?"

"You can't just have a salad." Apparently, Ronnie's gluttonous sensibilities had been shocked into attention. Sliding out of the booth, he grabbed Whitney's hand and tugged. "Come and let me tempt you with the wondrous delights of all you can eat. I'll even let you start with the salad bar. The king of salad bars. You'll never be able to look at one back in LA the same again."

"Besides," Cass added with a grin, "it's not like you won't be working off the calories later. Well, five minutes’ worth, at least."

Whitney smirked, but didn't have a chance to respond before Ronnie dragged her away from the table. Cass moved to follow, but Patrick took her wrist, stopping her. "It was twenty, by the way."

She didn't fight his hold, but the eyes she leveled at him were dark and daring. "That was because it was with me."

"Want to see if it was a fluke? I feel like I've got something to prove here."

"The fact that it happened at all was a fluke." Cass leaned closer, her breasts soft against his arm. "And I've already got the proof I need. 'Cause now I know, I can get to you anytime, anywhere I want."

He moved his thumb in slow circles, caressing her hammering pulse. "I think that's a two-way street, don't you?"

"Only if I drive in your direction."

Firmly, Cass pulled her wrist free, sliding out of the booth to head for the food. She'd changed her clothes after their tryst, and the hard tips of her nipples were just visible through her soft red camisole. Patrick didn't give her time to escape, on his feet before she could take a step, and when she aimed toward the salad bar where Ronnie and Whitney stood in line, he settled his hand in the small of her back, blocking her way.

"Let's try the sushi bar first," he said. He had no idea if she even liked sushi. All he knew was that it was the food farthest from the salad bar.

Whether she liked sushi or not, she followed his lead without a fight. Like most of the bars, it was crowded with people loading up their plates. He kept his hand on her back, massaging her lightly through her shirt. He stood far too close to her, blocking the view of his hand with his body, and if anybody said anything, he'd blame the press of people surrounding them.

"So you're not thinking about it at all?" he asked softly. "Not even curious about how it would be a second time?"

"Why?" Cass turned her head toward him, away from the crowds, so that he caught her profile and the dusky light of her eyes. "Do you have special tricks you save for the second go-around?"

"If you think a quickie against the wall even touches my bag of tricks, you are very, very mistaken."

"You got what you wanted, Patrick. If you wanted more, you should have played for higher stakes."

Patrick dropped his hand to his side and stepped back, allowing a respectable distance between them. "Perhaps. Do you think you can trust buffet sushi?"

She met his gaze directly as they reached the edge of the display. "About as much as I can trust you."