Grace Sutherland hates Christmas. Whether it's her former evil stepmothers ruining the holiday for her, or her looming deadlines making her life stressful, all she wants to do this year is finish her latest book project and forget the fact that her father has now brought home stepmother #3. When her desperation for distraction takes her to the local gym, she's surprised to meet a stunning, upbeat woman named Summer who becomes Grace's incidental muse as she begins penning another novel all about the things she wishes she could be doing during a Summer-inspired vacation.

This Christmas will be the first without Summer Iverson's father. Summer's sadness is made worse when she can't find the last gift her father gave her, a silly fish keychain that bore her name. The loss is made somewhat easier when the cute writer who Summer chatted up returns her flirtations and agrees to accompany her to the gym's annual potluck. A date and shopping spree later -- peppered with a half-dozen kisses -- leads them to planning a Christmas date together, even if Summer has to work that day and Grace has to attend her father's dinner with her hopefully not-so-evil stepmother.

As a storm rages and Grace is nowhere to be seen for their date, Summer begins to wonder if she was merely a muse for a holiday season. Is her sudden belief in Christmas miracles better left on the page? 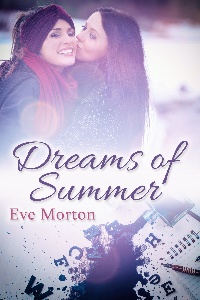 "All of that sounds perfect," Summer said. "So much like home."

Grace wanted to ask where home was, and why your average diner dish made Summer light up as if it was a five star meal, but Chelsea was at Summer's side again. She was boasting about how many people liked her brownies, and then thanked Grace for all her veggies. "I know I gave you a hard time about it, but it was necessary. Needed to keep us balanced."

Chelsea sent a glance between Summer and Grace knowingly. She nodded with her lips pressed firmly together. "I see I have interrupted the moment. Summer, just meet me by the car when you are ready to leave, and I shall whisk you back to safety."

"I drove you," Summer said.

"But I'm the designated driver. And at your service!"

Summer let out a breath the moment Chelsea had departed. She grasped one of Grace's hands and squeezed. "She's been trying to set me up for a while now."

"Yes, but this is the first time I've actually liked the person she thought was good for me. And to be fair, I liked you first. Chelsea just likes to pretend to be the author of this story. I think you're better inclined for that role."

"You too, you know," Grace said. "I really liked your Summer's Body Gym idea. I hope you get to see it happen one day."

When Summer blushed, and more people started to move in and out of the room, it was clear the party was over. Grace still had Summer's number from their exchanges about the party, so she didn't feel too bad about saying goodbye. "I'll call you in a bit, okay? I just have to get one last scene finished for the paranormal book, send it off to the publisher, and wipe my hands of the whole affair. Then I'll be free for that diner date."

"I have time. It's only a few more days until Christmas, though. Will you make it before then?"

"Deadline's tomorrow," Grace confessed. "So I have to."

Grace explained that the ending still didn't quite resonate with what she wanted. "I've done all the conflict resolution, and the climactic scene with the fighting, and all the plot threads have been tied up. But the final scene still doesn't sit right."

Summer considered the details for some time, asking a few questions as Grace fleshed out the story, and told her that the ending involved two women at the mall. "Since that was where one of the silver bullets had been found. Close to the pawn shop."

"Yes," Summer said, her blue eyes alight with wonder again. "Make the women kiss. I know they're already together, at this point in the story, but maybe when they got the silver bullet, they also got something for one another. A small gift, hidden until the very end, when they knew they were safe. So the best way to establish safety is a kiss. A kiss and a gift." Summer smiled. She surveyed the nearly empty room quickly before she stepped forward. "Sort of like this."

Summer pressed a kiss to Grace's mouth. Grace was so shocked by the display that she didn't kiss back right away. When she did, she was able to inhale a faint scent of coconut from Summer's hair before she pulled apart.

"Very good. I just don't know what the gift is," Grace said, biting her lip. She wanted another kiss. She wanted so much, but Summer merely shook her head with a sly smile.

"I gave you your ending. That's the gift. You gotta fill the rest of the blanks in yourself. And you don't even have to cut me in for this story."

Summer held up a hand. "I want you to have a good night. Finish your deadline. Then, we can see one another again. Much sooner than I thought, too."

Grace nodded. Just as another flicker of desire passed between their gazes, Summer was called by Karen. She gave a quick wave and returned to clean the room, even though Grace still lingered by the doorway. Summer recycled more than one item, threw out a couple plates that people had left behind, and then grabbed the empty Tupperware containers that had once held veggies and fruit. She gave them over to Grace with a wide smile.

"Waiting for these?" Summer asked.

"Um." Before Grace could make up a lie -- a playful lie -- Summer leaned close and gave her another quick kiss.

"Go home," Summer teased. "And write. Enjoy it, too. It'll all be over before you know it!"