Geri Thorton, the new owner of a garden center, is well-liked by everyone in her small town, but her ex has done a number on her, leaving her self-esteem at an all time low. No wonder Geri feels instantly lacking when she meets physics professor Kiara Martin, who is everything Geri is not: beautiful, petite, smart, and cultured.

Despite sparks flying between them, Geri continues to believe Kiara is way out of her league. But Kiara persists and invites Geri to attend the symphony. Surprised at how well that date goes, Geri suggests they watch a sporting event together. But hanging out at the local dive bar bores Kiara and the evening ends in a confrontation that makes Geri give up hope.

Can Kiara convince Geri she truly cares for and admires her for who she is? Or will their differences forever stand in the way of a relationship between them? 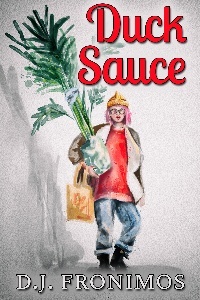 “Do you have children?” Kiara cringed as she heard the words coming from her mouth. What kind of weird question was that?

Geri laughed. “Where did that come from?”

“It’s just that you’re, uh, obviously a nurturer. I just thought, that is, I wondered ...”

Geri rose from the squatting position she’d been in. “No, no children. Not that I have anything against kids. But I haven’t met anyone I wanted to raise kids with. Not yet, anyway.”

Damn, that told Kiara nothing. Was the woman family or not? But despite her frustration, she didn’t dare blurt out another inappropriate question!

“Um, what about that little tree over there?” Kiara quickly turned away and headed toward a large planter off to the side.

“I’m not sure you could get that into your small car.”

“How do you know what kind of car I drive?”

“Um, I was near the window when you drove by. Couldn’t miss that red hair.”

Kiara laughed. “I never thought of it like that. So I don’t strike you as a stuffy professor, then?”

“Are you kidding? You’re anything but stuffy. I would have thought a college professor would be about sixty and grey-haired. You can’t be more than twenty-five.”

“Thank you, but I’ll be thirty-two next month. It takes time to get physic-y.”

“I see. You look younger.” Geri looked her up and down, and for some reason, Kiara was pleased by that, even if Geri was merely sizing her up for longevity like one of her plants.

“I’m not sure that’s a good thing. My students will never take me seriously.”

“Sure they will. I’ll bet when you step into the classroom, you’re an entirely different person. But there’s nothing wrong with making learning fun, too.”

“That’s true. I am passionate about physics. I know that’s a little odd, but there’s something satisfying in logic. Knowing how things work, and why things work together. Or don’t.” Geri listened attentively and didn’t seem skeptical, as people often did when Kiara tried to defend her chosen profession.

“I’m sure it’s very important in a lot of jobs. You probably couldn’t build a bridge without knowing something about physics. Or is that engineering?” Geri looked down as though embarrassed again. That seemed a habitual idiosyncrasy of hers.

“You might be surprised in how many ways we use physics, or are surrounded by it, without even knowing it.”

“Ha! Not here, though, I’ll bet. Just a bunch of innocent growing things, minding their own business and not worrying about formulas and numbers.”

“Not on purpose, but they can’t help themselves. Photosynthesis is physics. Well, it’s the meeting of physics and molecular biology.”

“There’s even a book about it called Plant Physics. I had to read it for one of my classes. It was actually quite interesting.”

Kiara burst out laughing. Geri was looking at her like she’d just told her there was no Easter Bunny. “Sorry. I didn’t mean to complicate your innocent friends here.”

“It’s okay. I’ll get over it. But here I thought I had escaped having to have deep thoughts. Now I’m a little worried I might not be giving these plants enough stimulation. What if they get too stupid to do their physics? Maybe I should at least play some music.”

“I’m sure music wouldn’t be bad. But you don’t have to do a thing. That’s the beauty of it. If all the ingredients are there, photosynthesis just happens.”

“Chemistry is important in a relationship. But all the ingredients have to be there, too.”

This was an interesting shift. Kiara raised her eyebrows and Geri looked like she wanted to crawl under some of her decorative rocks. At that moment a demanding customer broke in and Geri, with an apologetic look over her shoulder, left Kiara standing there alone with her thoughts, which were anything but physic-y.