For Edward T. Scupper, life has been one long, lonely road. Born in the mid-eighteen-hundreds, for reasons unknown, he stops aging at eighteen. At first, it’s exciting to live through the various decades while others succumb to time, but after a number of years, he finds that immortality is boring.

Science proves to be the answer, or so he thinks. Edward—Ed—journeys from one city to another in the US in order to find an answer to his predicament. He doesn’t wish for death. He only wishes to have a normal lifespan, like everyone else.

After numerous searches, he winds up in Portland, Oregon, where he meets Doctor Farhan, a molecular biologist and geneticist who is working on using gene therapy to improve or cure various ailments, including blindness in his daughter, Diana.

Ed tells Farhan of his desire to achieve mortality. Farhan promises to help him in return for the scientific knowledge, and a bargain of sorts is achieved.

Initially, Ed and Diana don’t get along. However, over time, they find themselves drawn to each other, as each of them seeks a cure for their problem, and only Doctor Farhan can provide it.

Before long, though, the young couple finds themselves under attack, Doctor Farhan is killed, and the two teens are pursued by hitmen sent by Fester Norton, an elderly tycoon who wants what Ed has got—the secret of immortality—and will stop at nothing to get it! 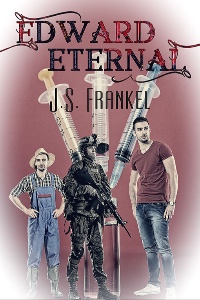 The fire blazed almost out of control, its flames licking the sky. The warehouse, a one-story structure that sold wooden beams and joists and prefabricated designs for shelves and desks and what have you, had caught fire about thirty minutes ago.

Now, the fire threatened to spread to other warehouses in the district. Most of the other warehouses were old and total firetraps. It was a miracle that they hadn’t gone up in smoke before.

Some of the other firefighters had already gone around to the back of the building to hit the fire from that area as well as the adjacent structures to douse any stray flames, but the fire still grew in size and intensity.

Harry McMahon, my firefighting partner on this mission, tapped me on the shoulder, and he yelled through his mask, “Phil, it’s too damn hot! I’m practically melting, here. We can’t go inside. If anyone’s in there, they’re already charcoal. You know what I’m saying?”

It was plain for anyone to see that he was scared out of his mind. Even through the mask, his eyes bulged out in fright, and his voice practically screamed, Let’s go home!

Harry was a hardcore firefighter, a ten-year veteran, one of the best. I’d been on the force for about eight months. He and I had fought over twenty blazes before. It took a lot to frighten him off a fire. In fact, this was the first time I’d ever seen him shaken to this degree.

“People might be in there, Harry. It’s our job to get them out.”

Job or not, what with all the smoke, it was impossible to tell. No one cried out, so either it was empty, or the occupants had been overcome with smoke inhalation. My partner shook his head. “Not a good idea, Phil. I know you’re the ballsiest guy in our department, but that doesn’t mean you gotta get killed over it.”

Truthfully, as whacked out as this sounded to someone who wasn’t in the know, getting killed was the only thing on my mind. I might have been the gutsiest firefighter around, but that was because I knew nothing could hurt me. Nothing ever had before, and I’d tried every method in the book.

No, this wasn’t suicide. I never condoned it to anyone or for anyone. For me, this was an out, only because everything else had failed to provide that for me.

On my way to the door, Harry, large and powerfully built, clamped down hard on my shoulder with a ham-sized hand. “Phil, I outrank you on this. Fer Chrissakes, I’m beggin’ ya, don’t go in there.”

A gleeful laugh burbled out of me. “Then stay back. For me, no better place to be!”

With that, I shrugged him off and ran inside, my breath rasping inside my oxygen mask. Tank on my back, ax in hand, I charged through the flames and found myself in the middle of the showroom. Everything was on fire, including the ceiling, it grew hotter by the second, and the smoke was so thick that I could barely see. This campfire had turned into an inferno.

My voice echoed over the room. No answer, only the sound of the flames clawing the air and the pop-pop-popping of wood. Fires like these were usually caused either by carelessness or faulty wiring. At that point in time, it didn’t matter. Let the investigators and the insurance claims boys figure that one out. Not my problem.

My problem was getting into this and not getting out of it. The flames would feed on my flesh until nothing was left, and any pain incurred would be worth it. I’d been alive far too long to let burns or acid or whatever worry me.

In a series of slow and careful movements, I took off my gas mask and tank, then I shucked my uniform and let the fire come. The pain came with it as well, searing my nerve endings shut.

Then the pain receptors shut down. In those few moments, I felt nothing, heard nothing, and I figured this was the end, so let’s have at it, and…

Crap, why does someone have to ask for help now? There went kill-myself plan two-hundred-whatever. The voice called again, weakly this time, and I followed the source to where a middle-aged guard lay trapped under a pile of timber. His face was bloody and swollen by the heat. His eyes were also swollen shut. “Who’s there?” he called out, coughing.

“Fire department,” I replied, feeling resigned to the situation. I had to help out. It was part of my job. I’d been so close! Ah, well, my time would come, just not today. “What’s your name?”

That was a help, in its own way. “What happened?”

As I heaved the timber off him, I noted his condition. Outside of some second-degree burns to this hands and legs, he’d live. Skin grafts would help—those, and time. Yeah, time was on my side, too, not that it meant anything.

He got to his feet with my help. “On duty,” he said between coughing fits. “Fire…it started in the lunch-room, spread. Maybe someone forgot to put out a cigarette. Spread…I couldn’t get out.”

“You’re getting out now.”

I helped him over to where I’d dropped my oxygen tank and mask, and I helped him on with them. “Breathe deeply and regularly. Can you breathe, Howard?”

Good. I helped him around to the rear exit, swatting away balls of flame that dropped from the ceiling. The heat was increasing, and the ceiling shivered. Any moment now, it would collapse. “We’re out of here. C’mon!”