When Daniel meets Carol, it's love at first sight. Though they are both only teenagers, he knows there's nobody else in the world he wants to be with. He envisions a lifetime with her, but Carol has big plans for her life, and they do not include settling down with a husband and a family. In the midst of the tumultuous 60s, the hectic 70s, and the vibrant 80s, Carol seeks meaning and adventure, and Daniel seeks her.

Though the world keeps pulling them apart, Daniel is the only man Carol has ever loved. No matter what separates them or pulls at their family, she's drawn back to the man who is her home again and again. Can their love conquer the world and carry them to the marriage altar at the chapel where they first met as children? 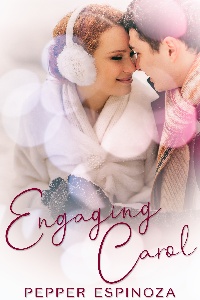 "What is this?" Carol demanded, holding up a creased and abused letter before Daniel could even greet her. "What the hell is this?"

"This was a mistake, right? I must have read it eight times before the words even made sense. You're getting married?"

She cocked her fist back like she planned to knock his head off his shoulders, but she held herself back, instead opening her fist to drop the letter into the mud. She stomped on it once, her face twisted. "How could you do that? Doesn't your word mean anything to you?"

Daniel had been gobsmacked, too busy looking at her, marking each difference and similarity, to be concerned about her anger, but her harsh words brought him back to Earth. "My word? My word? You were the one who disappeared for four years, Carol. You were the one who didn't write or call. I didn't even know where you were! It took me four months to track down May!"

Carol looked over his shoulder into the living room. "Is she here?"

"Emma, Becky, and my mother all went out to lunch," Daniel said.

"Can I come in? Or would you rather I just disappear?"

He stepped aside, inviting her in with a wave of his hand. She looked around with curious eyes -- Daniel supposed she was looking for evidence of Emma. She found the evidence she sought on the mantle, in the form of a framed photograph. Emma's familiar smile sparkled at the camera.

"Why did you come here?" Daniel asked.

"Because I don't want some stranger raising my daughter!"

He laughed, amused and sickened. "You're as much a stranger to her as Emma is. Why are you here?"

He grabbed her wrist, gripping the small bone with too much pressure. "Your bed?"

"Come on. I want to show you your bed," Daniel said, pulling her towards the stairs.

"You're hurting me," she protested, but Daniel didn't stop. He dragged her to the second floor and the master bedroom at the end of the hall. He pushed her into the bedroom, slamming the door behind them. "See anything different?"

Carol gaped at the king-size bed dominating the small room. "This isn't ... our bed."

"Yes," he said, crossing his arms.

Carol looked at him with stricken eyes. "You're serious about this, aren't you? You really mean to marry her."

"How could you? You made a promise!"

"So did you," Daniel countered, his voice deceptively calm. At that moment, he didn't know if he wanted to kiss her or strangle her for putting him through every sort of hell.

Carol wrapped her fingers around the nearest object -- a framed photograph of Rebecca -- and chucked it at his head. He dodged, the corner barely nicking his ear.

"That's the second time you've done that," he said, cupping his ear.

"You deserved it," she snapped.

A bright flash of red sparked in front of his eyes as an alien emotion clutched his chest. He moved towards her, but he didn't know what he intended to do. He reached for her, his hands closing around her arms. He could barely see her face, barely hear her protests above the roaring wave in his ears.

Carol pointed at his chest. "You were supposed to wait for me."

"For how long?" Now his voice climbed. "Five years? A decade? An eternity?"

"Until I was ready!" She cried. "How could you just forget me…so easily?"

"Because I couldn't do this," Daniel said, smashing her mouth against his.

He kissed her with the intensity of his anger and the breadth of his disappointment. He attacked her mouth, using his lips, tongue, and even teeth as weapons. His fingers dug into her shoulders so she couldn't pull away, so she'd be forced to stand there and take every angry word he couldn't express, every tear he wouldn't shed. He kissed her until his lips hurt, until he tasted copper against his tongue, but even then, he couldn't let up.

Carol responded in kind, not shrinking from him for a moment. He could taste her frustration and fear, even feel the desperation in her body. His body felt like a tight wire with too much tension on each side. That scared him, because he didn't know what would happen when that wire finally snapped.

They tore away, both gasping for breath. He watched her for a single, shimmering second -- the world holding its breath. She was the mother of his child, the only woman he ever truly loved, and she'd left him, but now she was back. He could push her away. Push her back out the door. Lock her out of his life. He could take her to the bed and claim her again, hold her so she wouldn't leave a third time.

Daniel didn't know what to do.

He didn't know his decision until he actually lowered his head to kiss her again. He deepened the kiss until he was immersed in her -- the way she smelled, the way she tasted, the way she sounded. Every small detail filled his senses, crowding out everything that wasn't Carol.

He pushed her to the bed, unable to feel his legs. He couldn't feel anything except her body, couldn't support his own weight. He straddled her with one thought in mind, with one goal, and that moment, it was the only goal that mattered. He needed to be inside her again.

He needed to love her again.