Enhanced humans were supposed to help explore the stars. But their existence threatened a fragile world, and so they were hunted on Terra, Luna, and Mars.

Before the purge of all enhs on Terra, Sartre is sent to Luna, where he falls in love and fathers twins. When his existence and his children’s existence is endangered, he flees with other clones to a distant moon.

When Madsen meets Sartre on a distant city-station, little does he know that their paths would intertwine. Although they share a mutual distrust of each other, they soon find out each other’s survival is dependent on the other, and their escape to a distant moon of Neptune may be the only chance to save their lives, and the lives of their loved ones.

When feelings between Madsen and Sartre surface, can they learn to trust each other to see where things might lead? 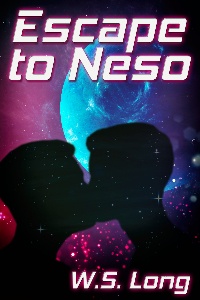 Sartre had expected the Tarazen scientist to meet him near the docks. As he feared, with the recent developments on the city-station, the lab was closed. No one answered as he buzzed at the front entrance. He gently tapped his zippered front jacket pocket. His payment was still there. He turned away from the lab and scanned the area. This whole part of the station with small businesses was empty. He was glad in hindsight that Enceladus 2 was the last station before he headed to his destination.

Europa 11 was crucial, and he was fortunate to have gotten what he needed. As his mother used to say in her Icelandic, her mother tongue, Rúsínan í pylsuendanum. Literally, if this last lab had delivered, it would’ve been icing on the cake, like she used to say.

This was the last stop before Neso. He now was faced with a choice of trying Titan or another moon’s lab in the future if he had failed here. It had taken months of secret messaging and negotiations to even get to this point on Enceladus 2.

The station listed again, and the lights flickered around him. He worried that the engineers would not be able to correct the problem and the orbiting city would have the same fate as its predecessor. He shook his head at his predicament, then started to make way back to the ship. He wondered if the two boys had finished their tasks, and if he could leave.

At this point he doubted if Madsen would be able to get off the station. They saw one A-class ship loading people earlier. The mining companies with their equipment had to be the first to leave, and then the luxury casino cruisers, along with different medivac ships would’ve taken off with the ill and elderly. Who was usually left behind were the engineers and station maintenance as their families probably already left. He didn’t know why Owen and Alex were still behind unless their parents were part of critical support and the last ones to leave.

Sartre came upon five men as he walked back to his ship. He’d forgotten that sometimes that another group that were last to leave in times like these were standing before him: the ne’er do wells. The ones who always got in trouble, spend more time in station jails than anywhere else.

“Look what we have here,” the bulkiest man said. “A Terran lost in the wilderness of this station that’s about to go crashing.”

“We’re not crashing, are we?” the man next to him asked. “They can still right the city, right?”

“Not likely. The mining companies have left. The other corporations took off, Families just left. We’re the last category. But that means we have nothing to lose, and everything to gain, right Terran?”

The foul-smelling man was addressing Sartre.

“Listen, I don’t want any trouble.” Sartre held out his hands; he tried to gauge the situation. There were five against one. The other three were quiet and moving to fan out and surround him. Sartre didn’t see any of them carrying rifles.

“We saw you go to Tarazen labs. What kind of business do you have with them?”

“That’s my business, and no one else’s,” Sartre said. “Really, if you’re right. We should all head out of here.”

“Why don’t you take off your helmet, so we can see who we are talking to?” The bulkier man continued. By now, Sartre just assumed he was the leader of this group of thugs.

“I’m not taking off my helmet.” Sartre slowly backed up but sensed that two of the men were behind him. By now, Sartre ruled out that they any Terran firearms, so Sartre guessed that they had shock swords, or sticks. More likely expandable shock batons, he said to himself. “I don’t have anything that you would want.”

“We’ll be the judge of that,” their leader said. “On your knees.”

“No way.” Sartre balled his fist to rein in his anxiety and growing anger. If the engineers couldn’t correct the orbit, they would soon have to abandon the city. They didn’t have time to waste. And these men were wasting time.

When the two men moved behind him moved closer, he debated about striking out and stopping them, but he didn’t want to tip them off. He had to let them think they could easily overpower him.

He sensed it was going to happen in a split second beforehand, but Sartre was ready for them.