Three couples, connected by a lesbian bar in NYC. Angela is bi, but in a long-term relationship with a man. When she rids herself of him, she's intrigued by an encounter with a lesbian couple at a wedding, who lead her to Ethel's where she meets Nicole. Nicole tends to be on the prowl, but soon she prefers to love of one woman. Angela.

Angela's ex-boyfriend's sister, meanwhile, struggles with desires to be a slave to a Domme, but seeks the love of Connie as an equal.

Finally, Val is a butch and Michelle a femme. A closeted femme (at least to her parents). And it almost costs her the love of a good woman. 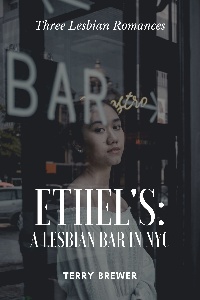 Angela didn't know what of what she was being told was the most troubling. That Paula knew Angela was gay. That Paula wanted her. Or that Billy was a fucking asshole who cheated.

She started laughing. "You are such a bitch. Why didn't you tell me about him?"

"Well, if getting home at nine after sleeping in another woman's bed makes one gay, I'm gay."

Paula's jaw dropped. "Are you serious?"

"She's a regular fuck-buddy. You'd like her. Although she has a thing for turning straight girls and I assume that ain't you."

"I was about 50-50 boys and girls in college but after I set in with your brother it was just him and he may be an asshole but he's good in bed. The person with whom I cheated? It was her bed I was in this morning. I, in fact, was a turning conquest to her."

Paula's jaw relaxed, but only slightly.

"It was funny. It all started at a wedding a few months before the one where we met in the ladies' room." Angela told of "meeting" Sherrie and Tracy and getting together with them while Billy was away. Her initial kiss and later tryst with Nicole, that while she didn't think the kiss was "cheating" there was no question about the tryst. That's when she spoke to Billy and his own little side-things explained why he ran out.

The rain was not letting up, still pounding against the apartment windows. Angela jumped up and grabbed Paula's hand. After picking up her keys, she pulled the older woman with her, now racing down the stairs, the elevator far too slow, shouting, "After what you told me about your asshole brother I need a good cleansing." The two were on the sidewalk holding hands as the torrents poured over them both. Angela looked up, her eyes forced closed by the rain, and was rid of him.

After a minute, the two ran back inside, Paula having been drenched twice within twenty minutes, and through the apartment door. Paula took a shower and put on yet another of Angela's T-shirts and yet another pair of Angela's running shorts while Angela took her shower. When they were dressed, and after Paula mopped up the water in the hallway with a towel, Angela suggested they head down to a coffee shop a few blocks away to talk. And that's what they did.

This was a traditional Queens coffee-shop. Both ordered scrambled eggs and toast and homefries and coffee. They were surprisingly comfortable as Paula answered Angela's "tell me about yourself." Angela knew the basics, college and job and all that but now she learned, and Paula was willing to tell, that she, Paula, cycled through several women and most of her relationships ended badly. Too often she was used and discarded when no longer useful. She blamed herself for picking the wrong women. Or, as she put it, "getting picked up by the wrong women."

She said that she had three relationships that were of any duration and in which she felt herself an equal to her partner. Once she fancied herself in love, with a professor of English Lit at SUNY Purchase, a local college, but the professor left when she got a tenure-track position in Georgia. Their post-move communications dwindled until they reached an aphotic darkness, and all of the light between them was gone.

The other two relationships, she continued, ended when she and her lovers drifted apart until they made it official and each took what they had in the other's place back.

For the first time, Angela felt sorry for this bitch, or more accurately for this woman Angela long thought was a bitch.

"I always knew about you but I wondered, figuring you might be bi-, whether you would simply end up marrying my brother and hating it and, more importantly, hating me. Angie, please don't laugh, but I haven't been with anyone since I found out that Billy and you were history."

This was way too much for Angela. The idea of Paula being taken advantage of by lovers was at odds with everything she knew about her. But Paula said that the only meaningful relationships she had were as equals. Angela had much to process.