Everything I Need (MM)

Frosting and fertility are Fiorillo family traditions. Joshua and Michael are trying to uphold at least one of the two.

When EMT Joshua Lawton left both his family and church behind, he never thought he’d live with anyone, much less get married. But here he is, facing carb-deprivation (because wedding photos are forever) and a cake tasting, all in the same month. He worries about his lack of family and relationship skills because family means everything to his fiancé. If Joshua can’t do better with Michael's traditions than he did with his own, will Michael come to his senses and call off the wedding?

Michael Fiorillo is the both the youngest and the only male out of ten siblings. He’s juggling all the expectations involved in a traditional Fiorillo family wedding and a fiancé who’d be just as happy if they ran off to Vegas.

When plans for their wedding cake are derailed by an unexpected religious objection, will the resulting fallout drive them apart or bring them even closer together? 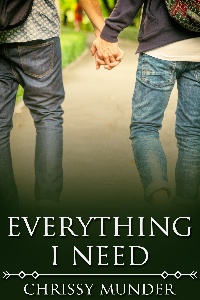 Everything I Need (MM)

“Hey, babe.” Joshua swept Michael into his arms. The collected aggravation of his day disappeared beneath the warm, almost cinnamon scent of his lover-slash-fiancé. Man, he never got tired of thinking that. “How late am I?”

“You mean how much groveling and giving it up in trade will you have to do?” Michael’s rich brown eyes glinted, and he flashed a smile just dirty enough to make Joshua’s toes curl. “You decide. To be fair, I’m early.”

“Whatever you need, babe.” His voice husky, Joshua pecked a kiss onto the offered cheek. “I am sorry. I had to park the bike a couple of streets over.”

“Really?” A thin line creased Michael’s forehead. “What happened to the spots behind the store?”

Joshua shrugged. “Roped off. Sign read something about church parking only.” It wasn’t a big deal. So, he had to walk. The extra exercise meant he wouldn’t end up like some of the poor souls he transported. “You ready for this?”

“It’ll be one less thing on our list.” Michael rubbed his temples. “Mom has been on me again. Said we made the appointment so long ago, Aunt Ginger would think we’d gone somewhere else and forgotten to tell her.”

Like Mrs. F would let that happen. Joshua pulled Michael closer, loving the coiled strength beneath Michael’s lean frame. Maybe Alex was right about the stress Michael was under. “Is that a too-much-work headache line on your forehead, or a Mama F too-much-wedding line?”

“A little of both.” The offending crease deepened. “I know we were supposed to have dinner later, but I need to head back to work when we are finished here.”

“Anything I can do to help?”

Michael’s face brightened. “I could use a hand with the rack.”

“You got it.” Joshua congratulated himself at the disappearance of Michael’s frown. He was ready to spend the rest of his life making sure his man’s forehead stayed smooth and wrinkle-free.

Family legend claimed Mr. and Mrs. F had opened Fiorillo’s Dry Cleaning instead of taking a honeymoon. Each one of their children spent time working both the front and back end of the store, with Michael choosing to run his alterations business from the same location rather than branching out on his own. A fact Joshua both appreciated and despaired over.

The store was where Joshua first met Michael, but it also meant their every interaction had an overly invested audience full of opinions said audience felt obliged to share. And while Joshua would be tired after finishing the rest of his split shift, being treated like he belonged at Michael’s side, as one of the family, made up for any temporary inconvenience.

Add in the teasing possibility of making his lateness up to Michael? Well, first they had to get this cake business out of the way. Then, Joshua mentally rubbed his hands together, he’d do his best to show his man how much he cared.

The bell chimed when they pushed through the door. The interior was on the smallish side, common in these older buildings, with a huge glass case front and center and filled to the brim with a variety of sugary goodness. Joshua’s stomach rumbled its approval and when he breathed in the almost overpowering scents, his knees buckled.

“Another seven, if I believe your ma,” Joshua grumbled, turning from the temptation to the framed enlargements of elaborately decorated cakes on the wall. There must be an area in the back where they would actually sit and try the various samples. This was all foreign territory, but a couple of guys at work had taken pity on his cluelessness and filled him on what to expect. Their combined advice distilled down to eat the damn cake, keep your mouth shut, and nod. He could do this. “How come this doesn’t count as cheating on my diet?”

“Because it’s part of the wedding planning.” Michael’s eyebrow twitched. “Are you complaining?”

Determined to head off a full-fledged eyebrow raise, Joshua held up his hands. “Nope. Not me. I’m just not sure why my weight matters. Everybody’s going to be looking at you, not me.”

“Because, according to the women in my family, wedding photos are forever.” Michael laughed; mischief lighting his eyes. “Plus my mom wants to make sure you suffer.” He extended his thumb and forefinger, an inch space between them. “A little bit.”

“Tell me why again?” Joshua played along with a mock frown, enjoying the lightness their joking brought to Michael’s mood.

“You are stealing away her last, little baby lamb.” Michael wrapped his arms around Joshua’s neck. “Even though I swear I came willingly.” He brushed his lips against Joshua’s, the gentle caress a soothing reaffirmation of their commitment. “And I reap the benefit of one totally ripped husband on my honeymoon. It’s a win in my book.”