The Undead Poet Society -- Elizabeth is used to standing apart because of her cane and her fangs. Then a beautiful woman way out of her league reads a poem she wrote.

Lust -- May is invited to a club by the girl she's been flirting with in class, and the evening goes better than she could have hoped.

Red and the Hunter -- When Red's grandmother is taken by the Wolf Clan, she turns desperately to the village's best hunter for help.

The Princess's Dove -- Each night, Crystal sneaks out to be with her secret lover Dove, and dreams a day they can love openly, without fear of what Dove's father would do if he catches them together. 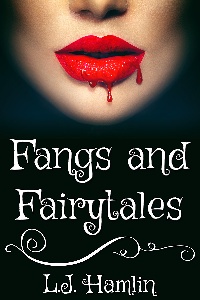 EXCERPT FROM "The Undead Poet Society"

Nerves like she hasn’t felt in half a century or more feel more like bats in her stomach than butterflies as Elizabeth West gets out of her car, ready to go to a poetry reading for the supernatural in a local book shop. Elizabeth smooths out her long brown skirt and brushes invisible dirt off the bodice of her corset before reaching into the car for her walking stick. A length of polished oak with a silver swan head as the handle, it looks as if it could have been made when she was. All she wears does, but none of it is actually from the Victorian era. God, thank steampunkers for bringing back a style of dress she was comfortable with.

Elizabeth takes a calming breath and walks the short distance to the bookstore; she can see that people are already there through the glass window front. Elizabeth catches glance of her: Lola, a vampire quite unlike Elizabeth, born in a different time. Her elf-like beauty has captured Elizabeth’s attention, but she’s dared not speak to the other woman. Lola is taller than her, with wicked curves encased in tight black jeans tonight and a T-shirt with some band Elizabeth doesn’t know over a clearly bra-less chest. She has hazel-green eyes and black and magenta-pink hair, shaved close to her head on one side with long bangs on the other falling over her delicate looking face.

She tries to picture what her parents would have thought of such a girl if they’d lived to see such fashions. She forces herself to walk the last few steps and not run away, her boots and walking stick clicking in time on the pavement. Her parents would have been horrified that Elizabeth had even been seen in the same room as someone like Lola, and Elizabeth takes a joyful delight in knowing she’s doing something they would disprove of. Hundreds of years have passed, but she still feels the crushing weight of her parents’ disapproval.

Pushing open the bookstore door, Elizabeth tries to relax, and she joins the group of women for the women’s and enbys only poetry night. She signs in with the girl behind the book counter, a lovely girl called Ling, who is a kitsune from Japan and whose idea these nights were.

“Help yourself to something to drink. We have snacks too. We have a staff fridge you can use if you’ve brought any blood or something for a special diet. We’ll be starting in about ten minutes,” Ling says with a smile.

“Thank you. I ate before I came, but I appreciate you catering to vampires.” Elizabeth inclines her head to Ling and moves towards the drink table for something to do. She finds herself close to two vampires she knows reasonably well and who’ve always been kind.

“Elizabeth! I love that shade of lipstick. What’s it called?” Mary exclaims on seeing her.

“It’s by Bésame cosmetics, and it’s called Blood Red.” Elizabeth can’t help a small smile. She chose this particular red lipstick for a few reasons. She likes the vintage brand, and the shade is a duplicate of one from 1922. The shade is beautiful, but the name had made her laugh. People used to tell her that her sense of humor was too dark. That was before she became a vampire.

“Blood? Whose blood?” Jane asks, appearing behind Mary. “No one we know, I trust?” she adds.

“Sadly we’re talking lipstick and not the real thing,” Elizabeth says, leaning against the table and propping her walking stick on it so she can have both hands free to pour a glass of red wine. Long before Elizabeth became a vampire, when she was a human child, she’d imagined red wine was blood.

“You look lovely though. Your makeup is always so flawless -- you must tell me your secret,” Mary says as Elizabeth settles back on her feet, glass in one hand, warm metal head of her stick in the other, her twisted and withered right leg only aching a little.

“Practice. You both look very fetching too.” Elizabeth doesn’t want to say that her mother and governess had been so strict about such things being perfect that she never grew out of putting an obsessive amount of attention into her appearance.

“How have you been?” Jane asks.

“Well, very well, and you both?” Elizabeth can see people starting to sit down, and she sees Lola in the front with the people who’ll be reading their own poems.

“Great. Will you be doing a reading?” Mary asks. She’d read her favorite poem a week before.

“Maybe. I’m not much of a public speaker,” Elizabeth says honestly.

“We’d better sit down. Come sit with us,” Jane suggests, and Elizabeth follows them to the middle row of seats facing a chair on the makeshift stage.

Elizabeth settles into a chair, and she’s glad Jane and Mary asked her to sit with them. She never knows who to sit next to at these meetings. She’s been coming for some time but still feels like an outsider. She doesn’t think they’ll ever be close friends, even though they’re nice enough women, because Elizabeth gets the sense that Jane and Mary feel bad for her. They often look at her stick and are overly careful with her, asking if she needs help with simple things, and Elizabeth doesn’t want to be any one’s pity project.