Figure It Out (MMM)

A one-night stand with a guy in an open relationship introduces a whole new world to lonely college student Luke. When the pressures that left him isolated threaten to destroy his newfound happiness, can brilliant but damaged Nick and compassionate, insecure Evan keep him safe?

Luke's parents, clouded by grief, isolated him and his siblings. Fortunately he's gotten away and has found intellectual fulfillment and a promising future in college. When he gets lonely, he can find an outlet for his physical needs in hookup apps. One of those hookups -- with gorgeous, kind graduate student Evan -- opens Luke's eyes to a world he hadn't been sure existed.

Evan is in an open relationship with law professor, political strategist, and professional pundit Nick. They love each other, but each is drawn to Luke for his own reasons. Luke agrees to try something new, aglow with the possibility of finding both success and happiness.

Not everyone is thrilled with Luke's choices. Some people from Luke's past don't like the thought of him being in a polyamorous relationship. They don't trust either of Luke's boyfriends, who come from very different backgrounds than Luke. And no one, not even they, know how far they'll go to get Luke back on track.

Can Luke, Evan, and Nick find their happily ever after together? 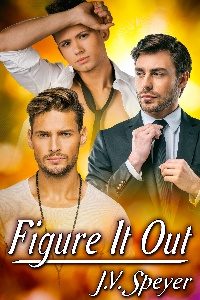 Figure It Out (MMM)

Luke let himself in and eased his way into the condo. The scent of spiced apple cider, warm and inviting, hit his senses before he stepped inside. He closed the door behind him and looked around, but the only person he saw was Nick. "Hi." He blushed and looked down. Nick always had that effect on him, and probably always would. "Where's Evan?"

Nick snorted. "His mother's up in DC for a fundraiser and asked him to come up and visit." He rose and headed into the kitchen. "I made some cider. Want some?"

Luke padded after him like a lost puppy. "It smells amazing, thank you."

"My dad used to make this during the fall every year." Nick ladled some cider from a pot on the stove into a mug and passed it to Luke. "It reminds me of being a little kid again, or at least of the parts of being a kid I choose to keep. I think I'll skip the parts where I did dumb shit like jumping off garage roofs to pretend I could fly."

"Oh, sure. It was fun the first six times I did it. The seventh time, I broke my arm and Matty Borchard broke his leg. We both got grounded for doing dumb shit, too, which was even less fun than having to spend the summer with a limb in an itchy white cast." Nick made a face that somehow spoke volumes about just how miserable spending a summer inside had been. "How'd you manage to avoid your uncle this time?"

"The fire exit from my building isn't alarmed." Luke shrugged. "I know, I know, it's a safety hazard. For now it works out well."

Nick pressed his lips together, and then he shrugged. "Yeah. It does. I just hope everyone inside locks their apartments well." He led them back to the living room. "How are things going, though? I know he's being kind of strict."

Luke squirmed. He was close enough to Nick to smell him. He didn't want to think about his uncle, or any other family members. "He's worried. I don't know why he's worried about this specific issue, but he is. But I'm not going to let it control me." He looked up and met Nick's eyes. "He knows a lot and I have to respect that, but he's not me. He doesn't know what I want or what I need. And he doesn't understand what I get from you two."

Luke closed his eyes and leaned into Nick's touch. "You don't know what that does to me." His pants suddenly fit all wrong, and he didn't care one bit. Maybe he should be a little worried that two words from a man -- this man -- could have such a strong effect on him, but right now all he wanted was more.

Nick chuckled darkly in Luke's ear. "I know exactly what it does to you, Luke. And I love it."

Nick kissed him, nutmeg and cinnamon heavy on his breath. Luke yielded to him, opening to admit his tongue and giving Nick everything he wanted. Nick was an amazing man, and Luke would never dream of refusing him. He breathed deep to take in all of the scents he could, immersing himself in the present and driving the tension of the situation with his uncle out of his mind.

Luke nodded and stood up. He hadn't come over just for sex, but he wasn't going to turn it down either.

He carefully removed his clothes when he got to the top of the stairs, folding them and putting them on the chair with his shoes underneath. Evan liked to fling his toward the closet, but Luke tended to be more careful about these things. He turned around when he was finished, but Nick was sitting on the edge of the bed with a little smile on his face. He'd gotten rid of his socks, but he still wore his shirt and dress pants.

Luke was so hard he thought he might burst.

Marooned with a Marine (MM)
Gordon Phillips
In Shelf
$3.99
Tweets by
sirenbookstrand