From the pen of J.T. Marie come three lesbian romance stories sure to warm your heart!

Renovated Heart: Joanne and Edie have both had their fair share of bad relationships in the past. But when they meet, there’s no denying the instant attraction between them. Joanne is ready to take a chance on someone new, but Edie has sworn off dating altogether. Can Edie let herself trust another again? Or will her past relationships screw up any chance of a future with Joanne?

Heat Wave: Wildwood: Tara returns to Wildwood in search of recapturing the summers of her youth, but her relatives would rather get drunk than have fun on the boardwalk. Plus her aunt is determined to set Tara up with a coworker of hers even though Tara isn't interested -- in men or in romance. Then she meets Delaney, and suddenly the summer heat isn't the only thing making her sweat.

Like I Love You: Dana falls for Bethany the first time they meet in college, but her feelings go unrequited. As their friendship deepens after graduation, Dana struggles to find a way to put aside the love she feels for Bethy. When one drunken kiss threatens to ruin everything they’ve built up together, Dana would rather run away than admit how she feels. But is she the only one? 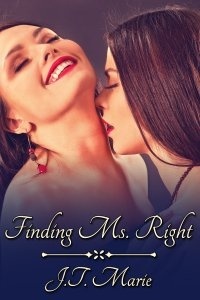 Behind the bar, rows of amber-filled bottles lined a mirror that reflected the interior of the building. Off to one side was a pair of swinging bat-wing doors, just like in an old western saloon. As Tara fiddled with her hair in the reflection, a woman pushed through the doors and grabbed a hand towel from under the register, then came over to where she sat. “Hey, honey,” she said, a bit of the Bronx in her voice. “What’ll it be?”

“Another Coke, please.” Tara spared a glance at the woman before returning to the mirror, then did a double-take.

Sweet Lord, she was gorgeous. Short, dark auburn curls tied up in a retro headband wrap, complete with bow, framed a round, tanned face. Eyes like pools of melted chocolate. A beauty mark on the bridge of her nose, though Tara couldn’t tell if it was real or drawn on, but it was arresting nonetheless. A stud earring in her lower lip, like another beauty mark, this one a tiny garnet as red as her hair. The deep color matched the matte lipstick she wore.

Softly, Tara said, “Hey. Where have you been hiding all night?”

When the woman smiled, her lips pursed into a perfect bow. As she filled Tara’s glass from the soda gun, she asked, “Are you here with Bridezilla?”

“What’s the correct way to answer that?” Tara countered.

The woman gave her a questioning smirk. “What do you mean?”

Tara shrugged. “If you think they’re silly and immature -- and they so are -- and I say yes, then you’ll think I’m the same way.”

“But you’re not.” The woman leaned on the bar as she wiped it down. “You aren’t drunk off your ass and acting like an idiot, for starters. So maybe you aren’t with them.”

“Then I’d be lying.” Tara took a sip of her soda, never breaking eye contact with the sexy barmaid. “And I don’t want to things to start off on the wrong foot between us. Because -- can I just say you’re beautiful? I just want to put that out there.”

The woman laughed. Was that a thin blush coloring her cheeks? It only made her prettier.

“What?” Tara asked. “Don’t tell me no one’s ever told you that before.”

“Not quite so bluntly,” the woman admitted. “At least, not right up front. I’m Delaney, by the way.”

“Tara. And yes, I’m with the girl group over there.” She waved in their general direction. “I’m the designated driver, responsible adult, whatever you want to call it.”

Delaney smiled. There was that pretty little bow again. Tara wondered if it was as soft as kissable as it looked. With a nod at the crowded dance floor, the bartender asked, “How’d you get roped into that? You and bride BFFs, or something?”

“Cousins. I came up for the wedding.” Tara stirred the ice in her glass and shook her head. “Actually, no. I came because I wanted to do the whole tourist thing. You know, hang out on the boardwalk, veg on the beach, the whole nine yards. My family used to come up here all the time when I was little, and I was really looking forward to getting back a bit of that, you know? Not ... babysitting a bunch of drunks. No offense.”

“Why would I be offended?” Delaney asked. “I’m not drinking.”

Leaning onto the bar, Delaney gave her a hard look. “It pays the bills, hon. Personally, I don’t touch the stuff. I never even got half as shitfaced as your cuz over there back in the day, and I used to get pretty wild, believe you me.”

Oh, I believe it. Tara gave her an appraising look and wondered how much of their chitchat was Delaney fishing for a good tip and how much was genuine interest. Because, no lie, Tara was definitely interested. The woman was attractive, there was no denying it, and suddenly all of Tara’s resolve to have a relaxing vacation without a hint of romance went out the door. The flirtation came easily enough, and God, she wanted to find out if there might be something more between them than that.

With a coy grin, she teased, “I’d love to hear all about it sometime.”