Findley Black and the Ghosts of Printer's Devil (MM)

Starting over at thirty-four is harder than Owen Key expected. Lonelier too. There’s Bella, and the odd assortment of kids he’d inherited when a father he barely knew left him Printer’s Devil. But his bookstore employees and his cat aren’t much good when it comes to getting laid.

Findley Black says a lot of things. At least according to everyone at the store. When Owen runs into him for the first time during one of his ghost tours, with his leather jacket and flirtatious looks, Owen finds himself more than interested in what he has to say.

Owen may have been hoping for a one-night-stand, but when Findley asks to stay the remainder of Halloween night in the Printer’s Devil in hopes of seeing the ghost of a serial killer, he finds it hard to say no.

Halloween is a time for ghost stories and trick or treat. But running out of candy is a bad omen, and it’s hard to get lucky when something otherworldly seems determined to ruin your night. 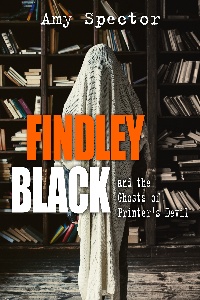 Findley Black and the Ghosts of Printer's Devil (MM)

“So, any chance this whole ghost hunting thing was just a ploy to get me alone?” He was starting to sober up, and the idea of ghosts, even on Halloween night, was losing its appeal. “Just maybe?”

“Since I’m being honest?” Findley straightened, stepping close. “Maybe a little, at first, but I’m afraid now I’ve got my heart set on it.”

“Oh.” Findley pulled the towel out of his hand, tossing it aside and Owen’s heart began to pound. “Well, that’s disappointing.”

Findley smiled and leaned in to kiss him, his hand on either side of the counter, pinning him there.

His mouth was warm, the kiss slow and deliberate, and Owen wrapped his arms around his neck, and allowed himself to be pressed back against the sink.

It felt good being kissed like this. To be touched and explored by another man’s tongue. Since moving back, Owen hadn’t so much as spend time in another man’s company. Not one that wasn’t way too young, and on his payroll. And they were strangers, yes, but it didn’t feel like all the times he’d kissed other strangers, in other places. Maybe that was because of what alcohol was still coursing through his system, or maybe it was because that, in some way, they’d lived on the periphery of each other’s worlds.

Whatever it was, when Findley pulled away, Owen fought the urge to pull him back.

They looked at each other a long moment, both breathless, and Owen hoped, both considering giving up on any thoughts of ghost spotting, in favor of getting each other off right there in the kitchen, or in the living room on the couch. Or maybe in the bed upstairs.

Owen would have voted for the bed upstairs. That way they could easily fall asleep and wake up a few hours later to do it again.

But finally, when Owen had been certain Findley was about to give in, instead, he stepped back and smiled. "Besides, haven't you always wanted to see a ghost?"

“The thought had never occurred to me.