In a city divided by a deep river valley, one side is stricken with a deadly outbreak. In order to protect themselves, the citizens on the other side of the valley destroy the connecting bridges and sever all transportation and communications links.

Brielle lives on the western side of the city in the epicenter of the outbreak. Rayden is a native of the east side. On the eve of the outbreak, he’s on his way to see Brielle when the two sides of the city are separated. With little information getting out, and no way to contact her, he’s desperate to know if Brielle is safe.

Even though the odds are stacked against them, the two lovers find an ingenious way to reconnect. 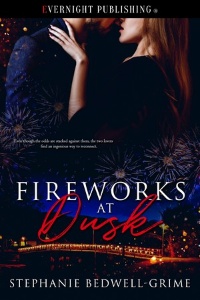 It was truly late by the time she arrived on his doorstep. For a moment, she wondered if he’d still be awake to let her in. Luckily, another tenant was coming out the main door as she arrived. Grasping the door before it closed, she entered the building and took the stairs to his floor.

A couple of knocks later with no response and she was worrying that she’d made a big mistake. Rayden had gone to bed. He’d never hear her. She’d end up taking the night bus home.

She knocked again and tried not to wake the neighbors. The peephole darkened momentarily and then she heard the locks disengaging on the other side.

Rayden had cracked the door open and peered out, as if he couldn’t believe what he was seeing.

Brielle offered him a hesitant smile.

The smile he gave her back was like the sun coming out. He threw open the door.

“I did all that for you so you could stay inside and get some sleep.” He’d obviously been asleep himself. His hair stood out in all directions. He was wearing a pair of faded black sweats and nothing else.

She stepped into his embrace. “I know, but after that, I couldn’t sleep. I had to see you. I had to tell you I love you in person.”

“You came all this way.” She could hear the wonder in his voice.

“And you made the most romantic gesture ever.”

He tightened his arms around her and she reveled in his sleepy warmth.

“Are you taking off your jacket?” he asked after a minute.

Brielle pulled out of his arms long enough to toss her coat on a hook by the door and put her shoes on the mat.

“I have bubbly wine in the fridge,” Rayden offered. “Or we could just…”

Still entwined, they made their way down the narrow hall to his bedroom. He’d obviously heaved off the covers when he’d heard her knock at the door. Seeing his bedroom in such disarray, he broke away long enough to throw the comforter back on the bed. It didn’t change that the sheets beneath were tangled, but it did give the room a neater look. His gesture made her chuckle.

Rayden swept an arm toward the bed. Together, they moved to sit on the side.

She was sleepy now, the adrenaline she’d used getting across the city dissipating. Sleepy, but not ready to go to sleep just yet.

Rayden wrapped his arms around her. “We could just go to sleep, you know.”

She was grateful for the offer, but it wasn’t what she needed. Her mouth closed over his, showing him her true intentions.

“Or not,” he said when they surfaced.