Clay Putnam has always been the responsible one. He runs the Good Fortune ranch and takes care of his ailing mother, all on his own. He makes the sacrifice so his brothers can follow their dreams, especially the youngest, Ty, a bull-rider on the professional rodeo circuit.

When Ty’s fiancée unexpectedly shows up at the family ranch, Clay welcomes her, even though nobody even knew Ty was engaged. Paige Murphy is smart, beautiful, and kind, everything Clay could ever want in a woman, but unfortunately, Ty met her first. Paige slips into life on the ranch with surprising ease, but they fight their growing attraction out of love and respect for Ty.

Passion and a surprising tragedy drive Paige into Clay’s arms, but honor, not infatuation, dictates who they ultimately are. 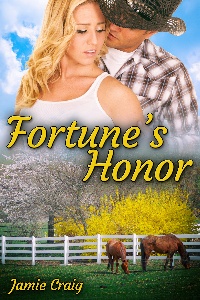 She found Clay in a small stall, stripped to the waist, a shovel in hand. The thump was the sound of manure and hay hitting the wheelbarrow as Clay methodically tossed each fresh load in a short arc.

He had to have been up for hours. Sweat gleamed across his skin, each muscle outlined for any and all to see. She watched a single bead run down the side of his neck, detour when it hit his shoulder, and then continue downward, over his chest, around the nipple, and along abs that looked like they'd been carved from stone. A thin dark line of hair snaked down the middle of his navel, too, disappearing beneath the waistband of his jeans.

He had no idea she was standing there. He worked with the freedom of a man who knew exactly what he was doing, knew exactly what he wanted, and Paige thought she'd never seen someone so intent on something so simple. Not even Ty looked like this when he was focused on his riding. It made her chest tighten and her breath quicken.

Her quickening breath might have alerted him to her presence, because he looked up suddenly, pinning her with his curious green eyes. An unexpected shiver of shame rolled through her, like he had caught her spying on something private, witnessing something she had no right to see. The moment came and passed quickly, and he buried the nose of the shovel in the soft ground at his feet. He leaned against the handle, his right toes resting behind his left heel, and favored her with a smile that put her back at ease.

"I didn't think you had." Sticking her hands in her back pockets, she ventured a step closer. "Do you always muck out the stables before breakfast?"

Clay wiped the sweat from his forehead with the back of his hand. "Sometimes. I came in here to get Sugar and I noticed Tony didn't do it on Friday." He tossed another shovel's worth of manure and straw into the barrow, and then set the shovel against the wall. "Did Ty show you how to saddle a horse?"

Paige shook her head. It was hard not to stare when his every movement drew attention to a new muscle. She half-wanted to ask him to put his shirt back on, but the other half that was enjoying the view quashed the urge.

"Are you going to need to shower?" she asked, and then immediately regretted it. It brought up images of Clay under the water, that dark line of hair wet and tempting as it led downward. Her shame returned in a rush. This was her fiancé's brother. The last thing she should be thinking about was getting on her knees and helping him wash up.

"Wouldn't make sense to shower now. Still got a whole day of work ahead of me." He paused and sniffed under his arm. "Do I stink?"

She stifled the desire to close the distance between them and check up close and personal in favor of turning it into a joke. "I'm standing in the middle of a stable. No matter what, you're going to be the best smelling thing in it."

Clay turned before she responded and left the stall, leaving her to follow him back to the tack room. Straps of golden light fell across his shoulders and the back of his neck. Dust clung to his skin, and he brushed it away from his arms.

Her eyes followed the long sweep of his hands, but when he kept missing one patch on the back of his bicep, Paige stepped up behind him.

He stiffened the second before her fingers touched his skin, holding perfectly still while she swiped away the stubborn grit. Though she didn't look up at him, she felt his gaze boring down at her, watching her hands glide over his muscle before she finally pulled back.