"They say there's a tape out there, and if you listen to it, you go mad. They say someone recorded it from a radio station back in the Taisho period, that's what they say, but no one's ever been able to work out what kind of a station would broadcast something like that!"

It's 1982, and Japan is prosperous, full of excitement and wonder, neon, and colour. Ishikawa Miki is sixteen, a failing student and part-time waitress at her parents' restaurant. In Koenji, there is all the nostalgia of a pop culture that Japan looks on from afar but can never fully bring itself to participate in -- Union Jacks hanging behind the bar in narrow venues the size of living rooms, the staccato stutter of the Clash on the radio.

Koenji is not Chelsea, not Camden, not even Carnaby, as much as it might wish it was. It’s just a backwater station on the Chūō-Sōbu Line, six stops from Shinjuku, a stone's throw from Nakano Broadway, smooth grey trains with their proud yellow stripes passing every time you turn your head away, every time you wish to be somewhere, anywhere but Koenji.

And yet, for all the melancholy and tedium of everyday life in Suginami ward, there is another world, a more dangerous world, that waits in the fields of stars above. In 1919, the first reported sightings of a tenth planet in the outer solar system were confirmed, a planet with such a unique atmosphere that it was constantly interfering with radio signals, a planet christened Lucifer for its ominous appearance in the night sky beyond the Kuiper belt.

In Shin-Koenji International Preparatory School, Miki discovers her curious English teacher, a foreigner with wild hair, their right eye hidden beneath gauze and surgical tape, may perhaps know more of those whispers from Planet Lucifer and the cursed cassette tape than they might wish to admit. 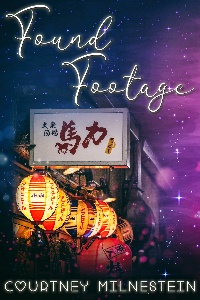 She noticed from a distance the slender figure leaning against the wall, one shoe up against the brick, a large can of Popsi in one hand, red, white, and blue, an encouragement to take some kind of challenge or other plastered across the side.

“I was beginning to think you’d stood me up,” Shizuka said, kicking away from the wall and falling in step with the other girl when she showed no sign of slowing.

Miki glanced at her with all the old apprehension, the desire of the previous day to make friends now thoroughly absent.

“Where’s the little girl?” she asked.

“Your guess is as good as mine, though I’m assuming she’s being chided by her parents or whatever.”

Miki didn’t listen, feeling the weight of the cassette tape in her pocket, remembering the expression upon Yuusuke’s face. She stopped dead, and Shizuka faltered, taking a few steps before turning, looking back at Miki with a confused expression.

There was a chill in the air, she thought, the faint hint of snow, cold enough that she should be getting home. Before her, the girl swung her bag around, and again, Miki caught sight of that stuffed toy, warm hazelnut fur and marble eyes.

“Hey,” she said softly, “if someone gave you the answer to something, and you hadn’t really been thinking of it too much, but now you had that answer you were curious, what would you do?”

“It’s hard to explain,” she answered, frowning with frustration. “If there was a question that lots of people were asking, but which you hadn’t thought about until recently, and then someone gave you something with the answer on it, what would you do?”

The other girl’s face became suddenly pale, the first flecks of snow falling from above.

Shizuka cursed suddenly, loudly and angrily, the foreign word sharp as it left her mouth, surprising enough for Miki to take a step back. She reminded herself that she didn’t know this girl, that she had nothing in common with her, save for the fact that they both went to the same cram school, yet before she could back out of the conversation completely, Shizuka was there before her, gripping her by the shoulders, the can of Popsi falling to the street, clattering loudly away as she looked her sternly in the eye.

“Don’t listen to it,” she said firmly.

Miki shrunk away from her gaze.

“I mean it,” Shizuka reiterated. “Don’t listen to it.”

She felt the blood rushing to her face, the recollection of arguments with her parents, the need to say anything to ensure that she was left alone.

Miki swallowed back her anxiety, looking at the other girl with wide eyes.

There was a moment between them, and then, at last, Shizuka released her, and she stumbled backwards, looking fearfully at this girl she hardly knew in her military uniform, with her bleached hair. Between them, the snow began to fall properly, drifting languidly down from the dark velvet above.

“I’m sorry if I scared you,” the other girl said quietly, swinging her bag back over her shoulder, the light momentarily catching the marble of the soft toy’s eyes.

Shizuka nodded but said nothing.

The other girl nodded, but made no reply.

Miki took a step back, making to leave, regretting the fact that she did not have her umbrella with her.

“That tape is bad news, Miki,” Shizuka said at last. “Don’t listen it.”

Miki forced a smile to her lips.

“I won’t,” she answered with uncertainty. “See you around.”

Hurriedly, she turned, walking away with long strides that might as well have been the precursor to a sprint, leaving Shizuka alone amidst the noise of the tofu shops, and drug stores, and falling snow. From behind her, came a rustling sound, gentle movements against navy blue canvas.

“She won’t heed your advice, you know.”

Shizuka turned to find the stuffed animal now leaning out of the bag, two paws over her shoulder, his marble eyes looking up at her.

She smiled wearily, looking back in time to see Miki vanish out of sight around a corner.