When George meets Harry Amdis, he thinks he’s met the man of a thousand daydreams except that George has a secret. He’s a newly turned vampire and has no idea how it happened or how to deal with it.

How could he be a blood-sucking fiend when he’s an almost vegetarian?

He’s told Harry the truth, and Harry’s up and left him. But who can blame him? There’s more danger in store for George, though, when he learns who bit him and why. And how is he supposed to get through Christmas with his family without the love of his life?

Harry Amdis loves George, but how can this crazy-hot guy be a vampire? And does he really believe he is one? Worse, Harry has a deadly secret of his own that goes back to his own nutty family. They can never be together. George has the kind of family Harry’s always envied. He wishes he could get over the fang part and love George for himself, his family, and his mom’s awesome fudge. But some things are more than dealbreakers…aren’t they? 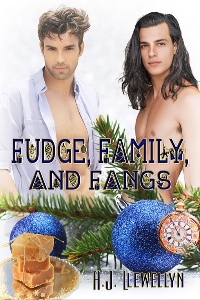 “Why won’t you eat it? Just tell me, do you hate my cooking?”

“No, Harry, I don’t hate your cooking.” I toyed with the Korean pancake he’d just plopped on my plate.

“Do you hate me? Is that the problem?”

“Of course not.” I would have given anything to fork a piece of the pancake and eat it. The cinnamon and butter oozing from it smelled so tantalizing. I shifted on my chair at the kitchen table. It was hard to avoid his gaze.

Harry shook his head. “You’re a freak. You wouldn’t eat dinner last night. I prepared pepper steak in honor of our third month together. You said it was overcooked. The only thing you seemed interested in was the blood left in the packaging. What the hell is wrong with you?”

I wished I could tell him, but how did I explain things? I hardly understood it myself.

“You hate my cooking. Come on, admit it.”

But he talked over me. “I don’t get it. Nobody hates my cooking. I’m a great cook. The best cook I know. So, please. Explain it to me. If you can.” He spat out the last three words with such bitterness I would have done anything to eat his damned scrambled eggs and pancakes just to get back to where we’d been.

On the verge of forever... On the cusp of having everything I’d ever wanted in life.

He grabbed a handful of his gorgeous mop of glossy, dark hair atop his cute head. “George. What the fricken hell is that supposed to mean?”

Fear and panic gripped me. “Exactly what I said. I can’t eat food. I love food. I want to eat food. I want all the pasta. All the fudge. I want it all.” My voice cracked. “I just can’t have it.”

“Is there something wrong with you?”

“You might say that.” Man, oh man. How do I explain everything I’d gone through the past few months? How do I convey my total terror that each day was just getting worse?

“Tell me.” He stood, naked, hurling my uneaten plate of food into my kitchen sink. The plate broke, and the sound made me jump.

“I can’t wait to hear this.” His voice dripped with sarcasm.

“I have a blood disorder.” I tried to keep my tone even. I didn’t want him to know how stressed out I was, but this conversation had been brewing for weeks. I’d been able to wriggle out of it until now, hiding veggies under mashed potatoes in restaurants. When we ate at his place, I’d smuggled bits of meat to his dog, Yoda.

“You’re making no sense. You seemed fine when I met you, and then what, a month in, and you start becoming picky. Picky, picky, picky.” He stomped on the pedal of my trash bin, and the lid flew up. He dumped the smashed plate and my breakfast into it.

My gaze flew to the wall calendar. December eighteenth. One week until Christmas, and I’d been so looking forward to seeing my family. I’d been so excited to introduce Harry to them.

They say you can’t go home again. But I do it. A lot. I’ve never understood people who don’t get along with their families. Mine is awesome. And all the women in it make fudge, which is my favorite thing ever. Christmas, particularly, has always held a special thrill for me. Fudge, and family, and leftovers.

I just woke up one morning to find a raging hard-on tenting the bed.

And fangs elongating in my mouth.

“I’m a vampire,” I said, surprised the words came out, right before the most important Christmas of my life, confessing this to the man I loved.

He was the first and only person I confessed my actual truth to, and it was going worse than I could ever have imagined.

“A vampire? Geez, Louise. Would you listen to yourself? Have you been smoking crack?”

“Of course not.” I was saying that a lot today.

“That would explain your astonishing weight loss and the sharp fingernails. I’ve never seen anyone trim their nails as often as you do. And the teeth! You started giving me head last night and almost bit into it.”

“You’re sorry.” He stalked around the kitchen, slamming doors, throwing cups and glasses into the sink. “Why don’t you just break up with me? Tell me the truth!”

“I am telling you the truth.”

“You. Are. Not.” He ran from the kitchen and into the bathroom, returning with a small, magnified mirror he kept in there for shaving. He shoved it in front of my face. “Huh. I can see your reflection, George. If you were a vampire, I wouldn’t be able to see it. I saw that movie The Lost Boys. Everyone knows that vampires have no reflection. You’re a head case is what you are.”

He clapped a hand to his forehead. “I gotta get outta here.”

That wasn’t a big surprise, to be honest. But I sure wished I could have hidden things longer, maybe spat mouthfuls of pancake into a napkin when he wasn’t looking.

There aren’t enough mashed potatoes in the whole world to hide things...