William Shakespeare said All the world’s a stage, but he hadn’t counted on shifters under a theater’s hot lights. Lovers Sam Hightower and Grant Newsome live for the stage. Although they have enjoyed the wanderlust of traveling theater for many years, each has grown tired of the road and wants to settle down. They also have a secret. As shifters and no part of any pack, they are lone wolves in every sense of the word. The full moon brings out the beast in them.

Even though their work as gaffers—lighting techs—puts them in contact with a large variety of willing, sexy men and women to share their love, they prefer men. They find a dancer, Luke Pearce, who makes their blood run hot, but Luke has a secret of his own to test them. Add scenic artists and lovers Charlotte and Lina to the mix, and you have a wild and sexy fivesome.

To spoil their fun and to their surprise, Sam and Grant discover another shifter in their midst, but this young person is so inexperienced and terrified she could expose them to the human hunters and get them killed. How can Sam and Grant protect themselves as well as the people they love? 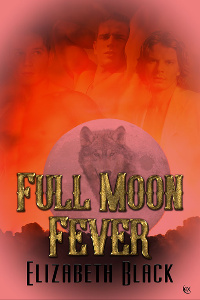 Sam Hightower tightened a Fresnel on a light tree as he watched the dancers warm up. He stood somewhat hidden in the wings, a position where he could observe the stage without being noticed. He preferred his life that way—out of sight, out of mind. He liked to blend into the shadows, keeping a safe distance, since his stay in the theater company was so fleeting.

At a height of six-feet-one inch and as lean as a whippet, Sam struck a powerful first impression. His thick blond hair fell to slightly below his shoulder blades. While he worked the lights, he wore it tied back and out of his way. Muscular and slim with an angular face and blue eyes, his Nordic features turned the heads of both men and women alike. Although he played both sides of the field, he preferred men. With each show, he and his partner, Grant Newsome, grew closer together, bonding with intensity only two men with deep secrets could. Sam feared their secrets could become their undoing on each leg of their tour, especially during the full moon. So far, they’d lucked out. No one had caught on to what they really were.

As was the nature of the traveling stage shows, his time in Portland, Oregon would not last long, even though they were  in the same city as their home base. He and Grant had been among the few stagehands who traveled with the company for its North American tour. The remainder for each show was filled with local crews.

Sam could see the entire country and not make a commitment to stay in any one location. Jumping from city to city was also safer, since there was little to no danger of the locals finding out that they sought the moon each month.

He and Grant had jumped at the chance to tour the Pacific Northwest and immediately joined the tour to stay close to home. In all tours, relationships between crew, actors, and dancers grew quickly with great intensity, but once the curtain fell for good, some of the cast and crew would part ways, sometimes to never to see each other again. While the split at the end was always painful, Sam willingly chose that way. He thought it best he never became too close to anyone except Grant. Grant had been his bright island oasis, a refuge from day-to-day troubles. However, such solitude begot loneliness, so they liked to share their love with a third or even fourth partner on occasion, and Sam was on the lookout for one at that very moment.

The man who flowed across the stage with such little effort looked so much like Grant that Sam blinked his eyes to make sure his vision wasn’t playing tricks on him. His pulse raced at the sight of the dancer’s ripped abs, shock of dark hair, and tight thighs.

Who’s the god who has the rapt attention of every man and woman in this room?

Those eyes are emerald green, so green they glow like an aurora in winter

His face bore a smoldering look of extreme concentration. Sam suspected this man would snap at him, turning on him in an instant if he interrupted his train of thought, much the same way Grant grumbled if Sam interrupted him. His grace could not hide the raw masculinity that moved with each muscle. Broad shoulders and muscular arms tapered to a narrow waist and an ass that threatened to slip out of the leotard he wore. Sam enjoyed gazing at that ass as the dancer soared across the stage. He preferred taut gluts to any other part of a man’s body.

The man’s resemblance to Grant intrigued Sam. Was he a tiger between the sheets the way Grant was? How could he approach him to find out? Considering the higher percentage of gays and lesbians in theater, there was a good chance the dancer would be amenable to a little male flirtation and maybe more. He wore the same dark and somewhat angry expression of intensity Grant wore when he concentrated on focusing lights. He smoldered like lightning in a crackling sky.

Each twist of the dancer’s hips enhanced the sensuality his meager leotard couldn’t contain. He strutted amid his shorter and less stellar-looking partners and brought a flush to Sam’s cheeks. He moved with grace befitting a dancer, and animal magnetism oozed from his every pore. Grant’s arms were fuller and stronger than the dancer’s from his years of experience hauling lights, but the resemblance between the two men could not be missed. Strong and majestic, the power of this man’s sexuality seeped from every pore, his potent form so beautiful it took Sam’s breath away.

A sultry and husky feminine voice jarred Sam from his daydream. “Sorry, luv, you’re a day late and a dollar short. We’ve already had him.” Charlotte stood before him with her arms akimbo and a hip thrust out, giving him a cheeky grin. Covered with splatters of paint befitting her job as a scenic artist, she brandished a brush in one hand.

Charlotte was tall for a woman. At five feet and ten inches and build like Wonder Woman on steroids, Charlotte could probably throttle Sam with those strong hands, but her slender body was not overwhelmed with bulk the way bodybuilders were. She was a nice combination of brawn and sleekness. Dressed in tight black jeans and a tighter black tank top that squeezed together her huge breasts, she twisted her bee-stung lips in an amused grin that told him she had once again bested him in the fucking department. “His name’s Leuker Pearce, and he’s a stallion in bed.”