In this anthology, Mark Wildyr introduces Gabacho, an itinerant Texas cowboy who likes to travel on horseback. Born Gary James Hawthorne and dubbed Gabacho when he ventures south of the border is a womanizer who is introduced to something different. And you know what? He sorta likes it.

Across nineteen stories, Gabacho explores the ribald, the serious, the occult. At the core of each story is love -- hopeless love, successful love, love that fails. There are chance encounters and planned encounters. Twins with different needs, guys accused of being losers who achieve small victories, a killer, a vampire, an old cowboy’s tale of how he got the recipe for banana pudding.

Meet all these and more in Gabacho and Other Wildyr Tales! 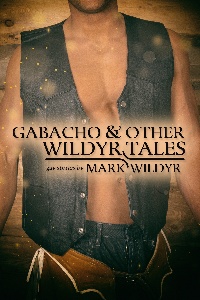 I wasn’t in a very good mood when I entered Carlos’s studio that evening. I glanced at the canvas on his easel, but it was covered.

Carlos noticed and put a teasing lilt to his voice. “You show me yours, and I’ll show you mine.”

I stomped over to the stool. “Let’s get this over with.”

“What put you in a high mettle?”

Geez, both of them --brother and sister --spoke better English than I did. And that dug a little bit too. “You’re interfering with my social life,” I snapped.

I hadn’t heard anyone say “Aha” since I was in short pants. “Whatever.” I plopped down on the high stool.

“Not that way,” he said, moving over to position my boots the way he wanted. “And the shirt --”

He put a hand on my chest. “You have the most interesting pectorals,” he said. “As soon as I saw them half-covered by your vest, I knew I wanted to paint you.” He gave a laugh. “Of course, that brown, curly hair and those blue, blue eyes, and that narrow nose contributed.”

“Come on, stop yapping and get to painting.”

“Wait a minute. What’s that on your cheek?”

I started to feel my cheek, but he brushed my hand away and moved in for a closer look, His finger rubbing me right below my left eye.”

“Just a speck of something. It’s gone now.”

Then he took me by surprise. I froze as he came closer. He paused a moment go gaze into my eyes before placing his lips against mine. I don’t think I intended to do it, but my mouth opened, and Carlos invaded me with his tongue. So help me, his kiss grabbed me by the innards too, I felt myself stir even before he placed his hand over my groin. A sudden image of old man Salvador galvanized me. I pushed him away.

“What’re you doing?” I asked, brushing my lips with the back of my hand.

“What I’ve wanted to ever since I saw you naked on the banks of the Rio Grande. You’re muy macho, Gabacho. But you already know that. The door is locked, amigo. We can do whatever we want.”

“And you don’t think Carla has a key?”

He frowned before his smile returned, making him as handsome as his sister. “That would be her problem.”

“Carlos, pickup your paint brush, or else I’m leaving.”

“No,” I said, without any oomph behind it. I couldn’t help but notice he had a semi-erection as he sent about his work. What had he said? You show me yours, and I’ll show you mine. Hell, he’d already seen mine. I was tempted to remind him, but that would just start things all over again. My lips tingled ... just as they had after Carla kissed me in the pasture.