Habu makes winter holiday season gay, with just a touch of angst and lust, in his Gay Holidays 2021 anthology, with six stories stretching from Thanksgiving to New Year’s Eve. All six stories are set in the United States, four of them in the heartland, with one moving from Los Angeles to New York City, and the last one in the Blue Ridge Mountains of Virginia.

In the first story, “Accepting Thanksgiving,” a young man returns to his family farm in Illinois from soldiering in Afghanistan wounded more in spirit than in body and worrying about acknowledging to his parents that he is gay only to find that they have hired a worker he had lusted after before enlisting. In “JJ’s Electronics Store Xmas Party,” a university student in Stillwater, Oklahoma, gives his all at a store Christmas party in an effort to gain seasonal employment there.

In “Channeling Tennessee Williams,” Two stage producers, one in Los Angeles and one in New York, endeavor to make the young male lead in a Christmas-season staging of The Glass Menagerie by telling the young man they helped make playwright Tennessee Williams’s career and can do the same for the young man. Green River, Wyoming, can be very quiet and isolating on Christmas Eve, especially if you are of Chinese or African extraction and gay in what is almost a completely straight, white town. Two business managers closing up shop across the street from each other on Christmas Eve seek company in “The Closers.” Also on Christmas Eve, in “Blue Christmas,” the chief facilitator of a Cleveland, Ohio, church-based homeless shelter fights the memories of his gay lover committing suicide on the previous Christmas Eve and gives in to his own sexual need.

In the closing story of the anthology, “Power Outage,” a young, but high-powered government official who has married for position and has found an opportunity to party just before New Year’s Eve with a trio of power company lineman studs passing through his Front Royal, Virginia, area, has what he thought was a safe tryst come back to bite him at the New Year’s Eve party he and his wife are giving on top Blue Mountain, in the Blue Ridge Mountain chain. 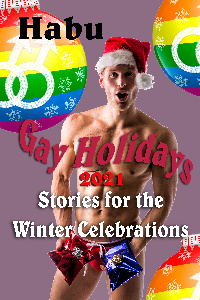