GenderQueer - Voices from Beyond the Sexual Binary

When GenderQueer was first published in 2002, it was groundbreaking, even inventing a new word for those whose voices had been hidden behind the walls of the gender binary.  Now—finally!—it's republished, and those voices are still fresh and compelling in a volume that can take its place as one of the field's early and most original "classics."

Perhaps more than any other issue, gender identity has galvanized the queer community in recent years. The questions go beyond the nature of male/female to a yet-to-be-traversed region that lies somewhere between and beyond biologically determined gender. In this groundbreaking anthology, first published nearly two decades ago, three experts in gender studies and politics navigate around rigid, societally imposed concepts of two genders to discover and illuminate the limitless possibilities of identity. Thirty first-person accounts of gender construction, exploration, and questioning provide the groundwork for cultural discussion, political action, and even greater possibilities of autonomous gender choices.

Joan Nestle is the cofounder of the Lesbian Herstory Archives in New York and the writer and editor of six books including the groundbreaking Women on Women series. Riki Wilchins is the executive director of GenderPAC, the national gender advocacy group, and the cofounder of the Gender Identity Project of New York City's Lesbian and Gay Center. She is the author of Read My Lips: Sexual Subversion and the End of Gender, Gender Theory, Burn the Binary and TransGRESSIVE.

Clare Howell is a senior librarian at the Brooklyn Public Library. 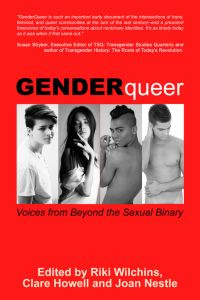 GenderQueer - Voices from Beyond the Sexual Binary