A gay ghost story guaranteed to give you the willies!

Following a disastrous war between the British Empire and the United States, Edward Grubb leaves the Royal Navy mourning a dead lover after his ship was sunk. A death for which he blamed himself. Desperate for work, Edward is sent to investigate the troubled Oaklight estate.

It isn’t long before Edward discovers that what’s going on at Oaklight Hall is a lot more than what the sinister Pastor Kid and Lady Flora who run the estate are letting on. Edward finds there isn’t just one ghost plaguing the troubled hall; there’s also the one he has brought with him.

Together with the handsome but reclusive young heir to the estate, can Edward solve the mystery behind the restless spirits as well as find peace for his own guilty conscience? 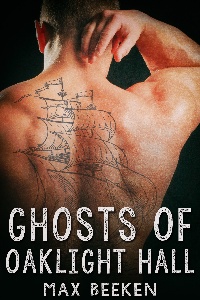 His lordship was seated at a small table with his back to me, his shirt half untucked. I couldn’t help but notice the pleasing curve of his lordship’s bum as it protruded out from under his shirt as he bent over the table intent on his work.

The room had a slightly odd smell of wood shavings and of something chemical that I couldn’t identify. Around the room were numerous glass cases filled with a variety of stuffed animals, although squirrels seemed to feature chiefly amongst them. Many of these stuffed denizens had been gifted with little human costumes and arranged in groups that suggested tiny playlets. Now that I looked more closely, I saw that his lordship was bent on another such creature. Pushing wood shavings into its chest cavity while the animal’s particularly bushy tail brushed against his mouth, causing him to spit out the occasional wood shaving.

On a smaller table near the door where I had entered, more of his lordship’s handiwork was crowded. A phenakistoscope sat perched on top; one of those toys that you rotate to make the images on it appear to move. I gave it a spin, partly out of curiosity, partly as a way of announcing myself. This one showed a scene of a fellow chopping down a giant strangling briar, only for it to grow back again an instant later.

“Leave it by the door, Ruby; I’ll eat it later,” said Lord Oaklight, ignoring me and continuing with stuffing the innards of his squirrel, giving me the chance to survey the room further.

As expected, the room was circular and took up the whole space of the tower’s attic, the bed placed centrally. Windows were situated all around the room, making the room lighter than was common in the rest of the house. Most of the windows looked grimy however. It seemed that the window cleaner was no more likely to have been paid than the gas man.

All but one of the windows was closed, giving the room a stuffy, oppressive feel. There was no fireplace, and looking up at the domed metal ceiling, which I could just make out, despite it being deeply shadowed. I guessed that it must be devilishly cold during the winter compared to how the room now felt.

The one window that lay open, faced onto the Shrivelwater Lake. A small telescope sat positioned there as if this was a vista that Lord Oaklight particularly enjoyed. The rest of the room showed Lord Oaklight’s clothes placed on rails. I suppose getting heavy furniture up the stairs would be next to impossible. The clothes were arranged almost obsessively neatly in descending size and colour. The bookshelves exhibited a similar dedication to order and sat ranked according to the heights they made on the shelves as well as by author. I noted titles on the shelf nearest me by Tennyson, Whitman, and other long-hair stuff I have never had time for. I wondered briefly what Lord Oaklight would do if one of his favoured writers published a book that broke the perfect symmetry maintained on his shelves.

Perhaps the strangest feature of the room was the number of floor-standing candle sconces. Predictably, there was no gas-lighting in this part of the building, so I suppose candles were the only alternative illumination. But what was odd about them was that nearly half the candles seemed to have bent over and now drooped at odd angles, as if they had been subject to great heat, although as far as I could determine, most of them never appeared to have been lit. Rather than puzzle over this conundrum, I thought it time I had another attempt at attracting Lord Oaklight’s attention. I gave a small cough.

“Are you sure there’s nothing I can get you, sir?” I said, affecting a girly falsetto. I suppose that wasn’t the best way to attract his attention, but I couldn’t resist the temptation to pay him back for mocking me during my first breakfast here.

He whirled around, suddenly dropping the tool he was using on the floor. I guess my impersonation of Miss Ruby hadn’t been as convincing as I’d hoped.

“You! What are you doing here?” he said, retreating to the far side of the room as if I was about to attack him, although so far I hadn’t moved from the doorway.

“I thought it was time I formally introduced myself. You are the heir to the Oaklight estate after all.” If I had thought that appeal to his ego would mollify him, I was wrong.

“Get out! Get out of here this instant. How dare you come here, you impudent fellow!”

“I only thought we should talk,” I said and turned to leave. Lord Oaklight remained against the far wall, panting in fear. My attempt to bypass an uncooperative Lady Flora seeming to have failed; I opened the door and set off down the stairs. The door, as if responding to its master’s wishes, swung quickly shut behind me.

The steps were steep and narrow, and I proceeded slowly. I had gone no more than a dozen steps when some intuition made me halt.

“Wait! Come back, came a voice from above” Don’t you hear me? I said come back.” Surprised at the change of mood, I turned and mounted the stairs once more.