Ginger the cat is the centerpiece of a lucrative entertainment and merchandising empire. A blue Christmas seems certain when his owner Katherine passes away right before Thanksgiving.

Katherine’s will appoints her loving and loyal groundskeeper Baily as executor, leaving estranged grandson Del livid. Since Del wasn’t around, it’s stipulated he must spend thirty days under the same roof as Ginger and Baily to get to know the cat as a loving companion, not just a commodity, in order to share in any inheritance.

As the men bond over the weeks leading into Christmas, Baily is unaware Scrooge-like Del is sneaking around, searching out cash and other valuables. Will they be able to make nice once Baily discovers Del’s naughtiness? Which list does Ginger end up on? And what will Katherine’s last gift to each man mean to their future? 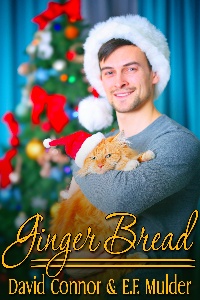 Baily brought me to his room at bedtime that night. “I won’t let anyone take you,” he promised. “We’ll live together in my truck, if we have to.”

Though I very much appreciated the sentiment, I’d become accustomed to certain amenities, certain luxuries. Those seven bathrooms I previously mentioned? Sure, I had no use for most of their functions, but I certainly would miss the toilet paper.

I stayed with Baily a while, to take care of him, while he thought he was taking care of me. Once he’d dozed off, I decided to explore, like I usually did at night. Del had chosen a room at the other end of the hall, a long hall. His light was on, but when I peeked in, he wasn’t there.

Other emotions surfaced, but not surprise, as I located him in the den. Dressed in nothing but boxer shorts, a pristine white undershirt, socks, and Harry Potter glasses, his attire indicated he was ready for bed, while his actions -- repeated glances toward the doorway, slow motion rummaging, and quietly shushing hangers as he pushed them from one side of the closet rod to the other -- indicated he was up to something nefarious. Del was a Hollywood star in his own right, a voice artist, who occasionally appeared onscreen in human form, guest starring on sitcoms or procedural dramas. Recently, he’d played Barry Potter, Harry’s lesser known unwanted redheaded literary twin on a late-night satirical comedy/variety show. I wondered if a real British accent might add a bit of charm to Del’s personality -- or lack thereof.

He’d obviously been nosing around a while. Desk drawers were pulled open, paintings on the wall were askew, even the drapes were not how I’d left them after climbing one like a rope earlier in the day. Within another moment, down on his knees, he found the large lockbox, the one I hid behind whenever Katherine sang. Trying to work the latch with the buckle on his watchband, his frustration was growing. All the grunting and huffing reminded me of Buford the Bull from the animated series he’d landed about a year after mine hit the screen. Del’s show was about a farmer named Grover Grunk. He played both Grover and Buford.

Those characters would have chosen a different four-letter curse word. Grover Grunk was a cartoon for adults.

Del hit his head on the closet shelf when he shot up from the floor.

Ha ha! My Cheshire cat grin rivaled the famous one from Alice in Wonderland.

I found black socks with light blue boxer shorts a total turnoff, even with the small but noticeable biceps up top and leg muscles dusted in orange fur below the waist. Orange fur I like.

“Too bad this isn’t a combination lock,” Del said looking at me. “Grandmother probably would have used your birthday or the day she got you.”

Like you know either one of those. Up close now, I decided Del Swann resembled a young Mr. Burns from The Simpsons a lot more than he did pig farmer Grover Grunk from his own show or Harry Potter.

So, he did know. I was a Christmas cat.

“Or mid-September, when you were born.” We met eye to eye. “You don’t really have to shoo.”

Hadn’t planned on it.

You’re the pig. Del also portrayed Pansy the Porcine Porker. I’m only one at dinnertime.

“And you sure are a handsome guy.” Though Del was raised in the northwest, I’d already caught the Grover Grunk Oklahoma drawl working its way out a few times when he spoke.

Though I’ll deny it vehemently, I was just thinking the same thing about you.

“You know where the good stuff is hidden? Stocks, cash, jewelry, royalty and acquisition contracts ... anything like that in here?”

Jerk. I leapt for the bookshelf, purposely missing in order to send four books, a metal box filled with coins, and an ugly porcelain orange cat that allegedly bore a resemblance to me thudding, clanking, and shattering against the hardwood floor.

I heard Baily’s hurried footsteps, just as I thought I would. 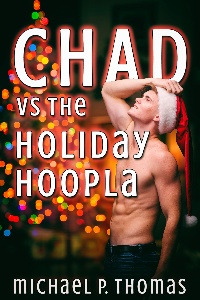