Glen is coerced into helping his senile mother by his gay nephew Tristan. On probation, Mom burns things on the stove and steals cars for fun. Together they get her into an adult home, where her old lover lives.

The old man reveals he fathered a child with Glen's mother who was given up for adoption, but he no longer remembers the baby's name. All he knows is it starts with the letter D. Of course, everyone a little older than Glen with a D in his name now looks like a possible stepbrother, even Mom's probation officer, Damon.

Glen and Damon take a shine to each other. Is there any way for the two to win with such a dysfunctional family? 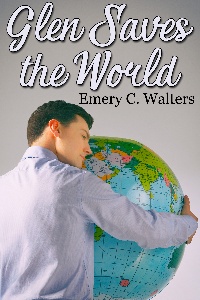 I don't know what I looked like that brought it on, but as I bellied up to the bar and ordered a martini, the guy next to me turned and made a face. "You know this is a gay bar, right?" he sneered. I paid for my drink and looked this guy up and down. I had had my haughty days at some of the restaurants I'd worked in, and this jerk just brought that right out of me. I raised one eyebrow and smiled. And then I felt my eyes widen; I knew this guy! His father was a minister; I won't say what denomination, but they were very much anti-gay, and the son, this fat guy in front of me here, had been one of the bullies who had tried their best to make life hell for anyone they deemed gay. As I smiled at him his face started to change. The various expressions -- confusion -- curiosity -- recognition and then shock were hilarious. He stammered out, "Well look who... I mean ... shit."

Well, he'd been right about me, but apparently, he'd been wrong about himself. I just continued to smile until he looked embarrassed, a blush rose up his face, and then he looked both angry and scared. And then I turned around and walked away. Five steps later and I thought, damn it; I should have called him by name. Oh well. As I looked around, I saw another familiar face smiling at me, yes, smiling at me, and then she waved me over and called me by name. Her voice was husky as if she smoked a lot, but she wasn't smoking now. She was drinking what looked like a double Scotch. I walked over trying desperately to remember who she was. A tad overdone on the make-up was one thought I had, not very nice of me I suppose, but there it was.

"Glen darling!" she exclaimed as her friend looked me up and down. "Join us! Are you back to stay? Say, wasn't that funny about your mother and the pet store? Hickman's shoe store has the monkey, and he's going to keep it. Joey Hickman always hated Winona. She's the one who owned the pet store. You remember Johnny, her son,

right?" Here she pointed at the man next to her.

"Yea of course I remember Johnny," I said, sliding in across from them and grinning broadly. (Speaking of broad, just who the hell is this woman? She obviously knows me!) Fishing, I said, "But where's Denny? Johnny and Denny were always together, back in the day."

Johnny snorted into his beer and had to wipe his face. The woman kept staring at me, leaning in closer, widening her eyes until finally, that light came on inside my head. "Oh," I said. "Denny?" I was stunned.

"I'll bet I win most changed tomorrow night at the reunion." She laughed. He? She?