Now that her brother Charles is happily married, Beatrice has time to take stock of her situation. Almost thirty, she is ready for a household of her own and a husband to share it with. But so far, Mr. Right has not appeared, only a profusion of Mr. Wrongs. Will she ever find a man who makes her heart race, such as that of the heroines in the romance novels she loves to read?

It is a dark and stormy night when a mysterious drenched Scotsman appears on the doorstep of Godshollow. Could this be the man of her dreams? Or has a terrible nightmare just begun? And how can she tell the difference, caught as she is in the midst of so much conflicting advice? Can she trust her heart to know the truth? 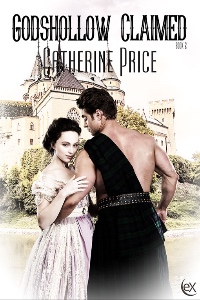 The cry could barely be heard over the thundering approach of Cromwell’s men. Even the trees in the forest opposite Godshollow seemed to move as the soldiers marched ever closer to the castle.

Lord Fraser turned to his wife. “It’s time,” he told her firmly.

“I can’t,” she whispered back, tears in her eyes.

Fraser took her by the shoulders and looked her straight in the eye. “Ye must,” he implored.

Pain gripped Fraser’s chest as he thought of his only child. “I know, blossom. But think o’ the bairn. Connor’s memory must endure. Take Jamie and go tae Scotland, I still have some family left there. Ma brother, Montgomery, moved back tae Cromarty. He’ll take ye in.”

“But this is our home! We built it. You earnt this with years of service to the country. They can’t take it away.”

“I dunnae think they care about ownership now. We stood by the king, we’re the enemy. There isnae a way we can defeat Cromwell, but by God will we fight. I’ll challenge those bastards until ma dying breath, but I’ll die a happy man if I know yer safe.” He kissed his wife passionately, holding her for what he knew would be the last time. “Go, lass,” he whispered. He pressed a gentle kiss on the forehead of the crying baby in the woman’s arms.

Fraser stepped back and pulled a hidden lever. The bookcase next to him was released from the wall with a quiet click, revealing a small passage. “They willnae know ye were even here.”

Fraser drank in one last look of his wife before the secret door closed. He quickly heaved a heavy table in front of the false case—he didn’t trust Cromwell’s men not to search the place. He couldn’t let them find the hidden escape route.

He ran out to the hallway and into the chaotic racing of the servants as the men prepared themselves for battle. Agatha and Jamie marked the last of the women and children to be evacuated.

Fraser strode purposefully through the crowd and made his way to the ramparts. He felt resigned. He knew they couldn’t remove themselves from the war indefinitely, but he’d be damned if he wasn’t going to give these Roundheads a hell of a fight.

He looked out over his grounds and saw the first of the soldiers appear from within the foliage. The footmen formed a barrier around the castle, spears pointed out defensively.

From somewhere within the encroaching army, a man on horseback trotted into the courtyard. Coming to a stop in front of his men, he pulled a piece of paper from his bag and laid his other hand on his sword.

“Lord Fraser Mackenzie,” the man shouted up at the castle. He didn’t wait for a response but began to read. “You are under arrest for loyalties to the former King, Charles Stuart, and his young son of the same name. We have orders to take you to the tower of London.”

“Ye can try,” Fraser called back. He rattled his sword provocatively between the merlons, backed by a line of men, some with bows, some with improvised projectiles. A heart-warming bellow of agreement sounded from those within the reach of his voice. When he had taken on his staff five years before, he had worried that the Englishmen would struggle to accept a Scottish nobleman – despite his twenty years serving the English Crown and Parliament. However, the men had surprised him, taking him and his family into their hearts and serving him loyally.

“Very well,” the horseman replied curtly. Then he turned his horse about and trotted back to the rear of his army.

“Buaidh no Bàs!” He cried the ancient Celtic words, holding his claymore aloft. Victory or death.  The men around him began to shout and cheer, though odds were, even after all this time spent living with a Scotsman, they had no idea what the foreign words meant. “Make ready!” Fraser instructed in English, leaving them with no doubts as to his intentions.

The archers stepped forward. Longbow strings were pulled back, arrows pointed at the enemy. Metal tips glinted in the sunlight.

For a moment, everything stilled. As though the world had come to a stop, men stood like statues frozen in time.

A hail of arrows darkened the sky and began to fall upon the victims below. Blood covered the ground in a scarlet blanket.  The bodies of the slain fell next to the objects that struck them—bricks, wood, chairs, tables, and anything else that hadn’t been nailed down. The inhabitants of the castle used anything to keep up the assault, however amateur, whilst the archers prepared the next volley.

Recovering from this first attack, the hostiles began their assault. Soon arrows were flying in every direction and men were beginning to clash in a fierce mêlée.

All around him, Fraser’s men were falling. He watched as the army brought forth a battering ram with which to break down the doors. He raced to the courtyard, calling to his men to maintain the bombardment from the battlements.

He joined the group of men standing defensively around their makeshift barricade. The doors were beginning to shake as the heavy thud of the wooden ram resounded. They would be through before very long.

At a loud crack, wood splinters scattered in every direction. Men shouted as they poured through the now open entrance, their shouts soon replaced by the clang of metal swords.

The courtyard was quickly strewn with dead men from both sides.