They call police Captain Justice Becker a hero, but he feels like anything but. Unable to control or erase certain memories, he finds himself trapped in the past and alone.

Ames Preston, a new cop at the precinct, feels an immediate attraction to Becker, and just as quickly, becomes a thorn in his side. When young Archie Wilkes comes running into the cop shop claiming someone tried to push him in front of a garbage truck, Justice isn’t convinced it really happened, until a suspicious death occurs on the same day.

As Justice, Ames, and Archie work together to figure out what’s happening in their quiet, little town, Justice can’t get the idea of a love triangle out of his mind. In the end, it seems only two men are destined for one another. 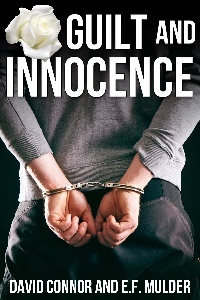 The spot in nature I liked so much popped into my head, how an uneven rocky wall rose up, up, up on both sides of a narrow valley in the middle. This was like that, in a way. Except here, the valley wasn’t water, and the mountains weren’t stone, dirt, and roots. Although they might have been. At first glance, I saw just about everything else. Instead of protected, I felt trapped. Instead of embraced, I felt suffocated. How in hell had Archie lived like this?

“Where’s the body?” I was shaking. I wanted to run, but the only clear egress was behind me, back out the door, and I couldn’t leave without seeing him.

“Over there.” The on-duty cop pointed.

“Can you be more specific?” Preston asked.

We were surrounded and confined by precarious piles of cardboard boxes, stacked papers, trash bags, plastic storage totes, electronics, holiday decorations for every one on the calendar, clothing in and out of laundry baskets, and colorful whatnots that weren’t always easily identified. Most people, I assumed, had one or two laundry baskets, maybe – three, tops -- one for darks, one for lights, one for whites. I counted eleven, right beside me and twelve through fifteen not three feet ahead. I had seen hoarding on TV, and now I’d seen it in real life.

“This way.” Marlon Glass had gotten there first, just ahead of me and Preston. He seemed quite weary already. The visual chaos, the foul, disorderly atmosphere could suck the life out of anyone, I figured. When Preston and Glass started off, I couldn’t get my feet to budge.

“Will do. Watch your step.”

No matter how much I tried to do just that, there was no way to avoid putting my foot down on something every time I lowered it to the floor. Actually, I never hit that, be it tile, carpeting, or hardwood. If I had to take a guess, I’d have bet the floor was at least two feet under the newspapers, magazines, food wrappers, shoes, and grocery bags. What appeared to be a pathway was yet another pile, albeit considerably shorter than the ones to the left and the right of me.

Another cop nearby hid his amusement. I wanted to snap but didn’t. Everyone handled a scene like this in their own way.

“It’s like that show,” Preston said, stating out loud what I had thought. “Did you know, Captain?”

“No idea,” I answered. “I haven’t been in the house since Archie was little, and he’s never said a word.”

Preston grabbed onto my arm when a rat ran across our shoes. Poor thing -- the rat, I was thinking of -- had probably been making a home under the pile of junk in the living room for years. There were probably other rat families in the kitchen, bedrooms, and hallways making homes under other piles of junk. Taking pity on Preston, too, I decided to send him back outside.

“You, uh, want to take a look around out in the yard?”

“Sure.” He’d already turned back toward the exit. “For?” he asked coming back.

I shrugged. “Anything. Take Glass. There’s Wyman. Debrief them.”

“Next of kin?” Preston asked.

I watched the trio of younger cops maneuver their way through the muck. Like paper and plastic quicksand in spots, at one point, Preston sank in shin deep.