Kaede is a Source, capable of powering a machine with her own energy. Working for the military, she is hiding the full extent of her power out of fear for herself as well as her countrymen. She is afraid of provoking a war if her abilities became known.

However, not everyone agrees with her actions, and Kaede faces uncertainty and turmoil. Mari, a war machine pilot, seems to be out for glory and action. Can Kaede trust her or not?

War looms and Kaede is torn. What can she do to change the tide of battle? 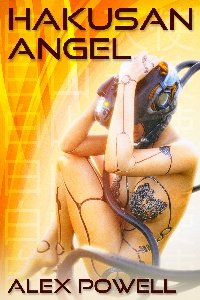 Mari swooped in and scooped up a beer as she passed by on the way to her usual table, Matsura right behind her. It wasn't the beer she usually drank, but any beer was better than waiting for the mad rush to be over. She clinked her glass with Matsura's and took a swig.

"So where have you been, then?" a table of Level 3 Sources were watching them, gathered up in a tight group and wrapped up in summer yukata.

"What do you mean?" Mari asked, looking them over.

She couldn't help but notice that none of them were drinking beer. It wasn't that she thought that everybody had to drink it, but all of them had drinks one might consider more refined. Sources sometimes thought of pilots as boorish and rough, but as much as she didn't want to play into stereotypes, she liked beer, and that was that. Maybe they liked their classy mixed cocktails and high-end wines too. Mari just hated it when the differences were so obvious.

"The bar was actually quiet for once," said one, and her words were bitten out concisely and pronounced with conscious precision, like she put effort into shaping every syllable perfectly.

"It's been so long that we've been without a Level 1 Source, that we pilots have fallen behind on training new Level 1 operators. The last batch are nearing retirement. So this latest uproar has drawn attention to the fact that should we find a Level 1 Source, we don't have any new pilots ready and waiting. All Level 2 and 3 Pilots were tested again so that we could find some new stock," Mariko said.

"But that's important!" burst out the Source next to her, waving her drink at them. "How do you get behind on things like that?"

"It's not as if we had any control over it," Matsura snapped. "Don't blame us."

"It's a wonder pilots have control over anything."

"And there's the sarcasm," Mari sighed and tugged at Matsura's elbow. "Let's get out of here. No time to waste on Source hypocrisy, seeing as they aren't even properly awake when they're in their trance. Really, they're no better than a walking battery."

"Battery?" the Source hissed, standing up and slamming her drink down on the wood tabletop. "I'll show you battery!"

"Sae, no!" the Source next to her pleaded.

The Source apparently called Sae shrugged out of her yukata and her friend put an arm out to grasp her shoulder.

"You better let go of me, Kaede, or you're going to get caught up in it."

Sae closed her eyes, and her brows lowered in concentration. A moment later, all the ports down her limbs started crackling with energy. Her hair, which had been loose around her shoulders started floating upwards in twitching tendrils.

Mari took a step back. She had never seen a Source instigate anything while not connected to a machine, and she had no idea what to expect.

"Now you've done it, Mari," Matsura said from beside her.

The crackling increased, and suddenly the tension burst, sending arcs of blue energy racing over the surface of her skin and connecting at the ports, like a web of light. As soon as that happened, the place where Kaede was touching her arm sparked, and she cried out. It must have triggered something in her as well, because a moment later, her ports started crackling, too.

"I'm not a battery," Sae said, and her voice had become distorted with energy. "I'm a weapon."