He Comes With the Dark (MF)

Stifled by her restrictive mentor and clientele in the Bay Area, artist Arabella seeks a new home in Sedona, Arizona. The ambience rejuvenates her creativity even as she encounters an earlier denizen of the region who turns her narrow life inside out! How can an invisible entity possibly awaken her deeply sensual nature and school her in the carnal pleasures she’d felt were greatly over-rated? Will she be able to channel this new energy into some incredible artistic efforts?

Zeth fled Lemuria when a natural catastrophe of earthquake, volcanic eruption, and tsunami swallowed his homeland. He led a boatload of survivors on a quest to seek a new home. The group struggled and splintered disastrously, leaving him one of a very few survivors. After a terrible conflict, he is condemned to remain a disembodied spirit until he can again become human and modify the tragic events in which he played a large part. Millenia later, he finds a new resident making her home in the spot he has come to consider his. She is an artist -- using only the power of his intellect and energy can he seduce her into visualizing a likeness which he can take to create the new body he requires?

Once incarnate again, how will he manage to gather the folk needed to reverse the ancient curse and repair broken karmic patterns? Perhaps Arabella is also the magnet drawing several of them to the scene. Once he is a man again, Zeth must first enact the ancient drama anew and then choose whether to accept his freedom to go on to the spirit realm or remain to live a normal span as a human. 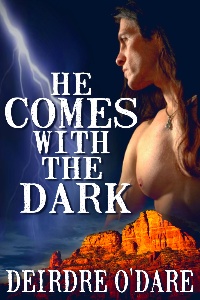 He Comes With the Dark (MF)

"Beauty again, is that all that men think of? Beauty and sex, I mean." The words slipped out before she could stop them, propelled by the doubts that had plagued her since her early teens. Those doubts colored her tone with fifteen years of resentment. She wasn't beautiful so she should be easy if she sought popularity. What a female lacked in appearance, she must perforce make up in ready sex.

"No. Not all of us, at least. I am not greatly concerned with large breasts, a certain color of skin and eyes, the style and amount of hair. I will confess I enjoy a lively romp as much as anyone -- or I did, when I was a living man, but there are other qualities to seek in a woman besides her willingness to couple and the shape of her body. She must learn to enjoy the mating as much as her man, and it's the man's duty to teach and show her these ways."

"Ahhhrrrgggg." The strangled sound emerged from Arabella's throat. No man she'd ever known had accepted that premise. "You mean, uh -- er -- that you'd take the time to ..." She'd never thought herself a prude, but when it came to speaking out so bluntly, the words lodged in her throat and refused to be said. "I never -- it was not fun, mostly sex was not even pleasant."

"Ah, that is very sad. But that illustrates the problem, sex without love, without caring is hollow and lacking. There is just one thing to do, then. Start all over from the very first and let you find how very pleasurable the play between a man and a woman can be. I have my work cut out for me, do I not?"

He chuckled, and at the same instant, reached out and touched her. The combination sent a burst of heat flaring through her body. The touch was casual and light -- just a hand on her bare arm, a fingertip brushing her side with the lightest of feather-touches. Yet a match pressed to her skin could not have ignited more intense sensation. Involuntarily, she again shivered.

Once more as on earlier nights, the mattress dipped slightly. This time she felt a warmth at her side. Nothing as tangible as a body there, but a spot of higher temperature than that of the room. His hand stroked down her arm slowly, paused at her wrist, and then moved back up to her shoulder. "Teaching you and learning you, all at the same time. Intriguing thought. Yes, this will do much for us both."

His hand shifted now to rest on her upper chest, well above the swell of her breasts, but slowly the long fingers spread and reached, thumb in the hollow at the base of her throat and little finger extended into the valley between her breasts. For one breath and another, he did not move. The touch remained light, no weight but only the sensation of skin to skin, awakening a delicious tingle of desire.

He skimmed a quick stroke down to her waist, slipping between her breasts without touching either of them, tracing a feathery circle around her navel and then gliding back to her throat. He rested four fingertips on the pulse thrumming there at the side of her neck, as if counting the beats which seemed to come at a pace much quicker than normal.

"Touching, simply touching is wonderful, expressive, and stirring, no?"

"Should I stop yet?"

"Only if it is not pleasant, if you are not feeling pleasure."

She had a wild desire to laugh but she didn't. She had never felt such pleasure and she knew he had barely begun. She didn't move, because she could not. As if hypnotized, she lay still, bare, exposed and at his mercy. Every inch of skin tingled in anticipation. Where, when, how would the next touch come?

Her eyes were wide open. She could see the familiar stars through the skylight overhead and the lighter area where the moon shown against the curtains on the window which faced southeast. She could not see him, though, not even the patch of denser darkness she had thought she saw before. Yet he was there, beside her, sitting on her bed. She knew, but could not say how she knew. The only thing she really felt was one single hand ...

Again, a slow sinuous stroke from her throat down to her navel. This time his fingertips brushed along the inner side of her right breast, an impact hardly strong enough to be termed a touch. He rested his hand for a moment, flat on her belly, below the arch of her ribs. Surely he felt the tremor that stirred her flesh, the swift rise and fall of her breath, the skipping stutter of her heartbeat. With light pressure on the heel of his hand, he moved it in a slow circle, sunwise, shaping the slight roundness of her abdomen.

"Nice round womanly shape," he said. "Only a girl, too young for a man's desire, should be flat-bellied and angular."

"I've always thought I was too voluptuous, too Rubenesque." Arabella whispered, speaking through stiff lips, as if the words had been dragged from her. "The boys always liked the slim girls, big boobs maybe, but the rest thin. Like the models in those magazines ..."