It is said that long ago Herne, the god of the Hunt, could use his Horn to make wolves obey his commands. A legend that Amy Oakley, Alpha of the Howlers pack, learned as a child and stopped believing in long before her first change beneath the full moon.

After spending three years fighting for her lovers and packmates’ right to live among the werewolves of Londinium, all she wants is a chance to breathe, go back to running her pub, and never see the manipulative Marcel Charron again.

As an ancient prophecy begins to unfold, can Amy and the Howlers find the Horn of Herne and keep it out of Marcel’s hands, or will his web of schemes and plots spell doom for their pack and the rest of London’s werewolves? 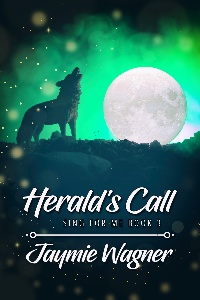 Leah swallowed hard, and her voice was a hushed, raspy whisper. "Do you think ... I mean ... if my mum was a werewolf and she knew I wasn't going to be? Could that be why she got rid of me?"

"I mean ..." Leah shook her head, tears starting to well in her eyes. "I never really knew anything. Where I came from. Why I was abandoned. Nobody even knows who gave me up. They just found me like a lost wallet!" She shuddered in Amy's arms, tears running down her face.

"I finally learned something about where I came from and suddenly I wish I hadn't!"

Abigail sat down slowly. "Leah," she said in her most kind but firm doctor's voice. "I can't speak to why your parents made that decision. I wish I could. What I can tell you is that mitochondrial DNA takes a very long time to change from generation to generation, and the fact that you did not possess the full were sequences until you were turned suggests that it was a fairly distant ancestor. Five or six generations, easily."

She waited for Leah to meet her eyes before she concluded: "Whatever their reasons, this was not one of them."

Leah gave a sniff and dried her eyes with the back of her hand as she sat up. "That's ... that helps. Thanks, Abby."

"Of course." Abigail smiled at all of them before going back to the papers. "So -- as I said, we don't know as much, medically, as we would like about Turning. But this does suggest a few things to me. For one -- it may explain part of why you survived the process, particularly with a diet that was ... not terribly conducive to your new existence."

That got a weak laugh out of Leah, and Amélie smiled with relief. If she could laugh ... it was a good sign. "So -- you think that explains my eyes, too?"

"It would seem so," Abigail agreed with a nod. "I am not certain why it took so long to express, but my theory is that some of the latent werewolf traits you carry finally began to show through."

Leah's lips pulled into a slight frown. "Could that be part of why I'm a different sort of wolf than whoever turned me?"

Amy reached up to lightly scratch at Leah's scalp as she examined the different sets of results. "Does that explain Leah's ear, too?"

Abigail shook her head and went back to the first chart. "The trait that affects the development of cartilage in the ear is an autosomal one. It most likely came from the were who bit you."

Amélie looked down at the results again, and suddenly felt like she'd been given the last piece of a puzzle.

No one has been able to find the wolf who bit Leah ... but they were assuming it was a were who lived in England.

Leah said the dog who attacked her had a blonde and pale grey coat.

Marcel knew Leah had no family.

Marcel knew where the Howl was.

Leah never spoke to Marcel at the trial, and Amy would not have told him anything about Leah or herself. If the records from Leah's trial were sealed, there is no way he should have known any of the things he tried to use against us.

Marcel always said his ears drooped because of an old injury from a fight ... but Marcel lied about almost everything.

Her chest felt tight as the facts began to add up.

Marcel is a liar.

Her mouth felt dry as she looked up. "Abigail?"

Everyone turned to look at her, and Amélie didn't try to hide the dread and shock she felt.

"I know who Turned Leah."