Hidden Among the Roses (FF)

Lilian hurries across the park on a beautiful August day. Out of breath, she pauses and surveys the park. Memories of Jean flood her brain: their first meeting, lazy afternoon strolls, and stolen kisses beneath the beech trees. They’ve spent three blissful years together ... and that’s about to end.

Pain stabs Lilian’s chest and she feels nauseous. Has she overheated or is this guilt? Lilian dithers, uncertain what to do. Jean’s waiting in the rose garden and she’s already late. To delay further is rude. But Lilian is heartbroken, torn. How can she walk away from the love of her life? How can she let society dictate who she loves? 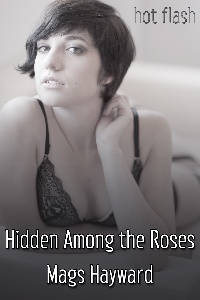 Hidden Among the Roses (FF)

Lilian hurried past the duck pond, striding towards the far end of the park. She turned her head at the shouts and laugher of children on the swings and see-saws in the play area, eyed the watchful mothers congregated on the benches dotted along the path. Turning on to a side track, she headed away from the shaded woodland trails and walked between beds of English lavender and rosemary, alive with insects. Ahead lay her destination -- the rose garden.

The heady scent of mature blooms greeted her and the breeze sent a handful of velvet petals fluttering to the ground, strewing her path as if she were royalty. Set out like a maze with gravel paths snaking between low, box-cut privet hedges encasing sturdy rose bushes, this garden was her favourite, especially in August when the blossoming roses overflowed with profuse fragrance. She plucked a ruby rose, held it to her nostrils, and breathed deeply. Flower in hand, she summoned the courage to complete her mission.

Gravel crunched as she wound her way toward the centre of the maze. She knew the route well, could have walked it blindfold, and made quick progress. Almost there, the path forked and Lilian took the left branch, an obvious dead end since the life-sized marble Cupid firing his arrow from the heart of the maze was visible a short distance to the right. Left was a trail rarely taken. Secluded, it curved downhill into a dip where the hedges were much taller and it ended in an alcove, where a bench was tucked away out of sight.

Jean was waiting. Dressed in tight white shorts and a lemon shirt tied in a knot at the waist, bleached blonde hair stylishly tousled, she was as alike to Marilyn Monroe as a short olive-skinned girl of Mediterranean descent could ever be. Spotting Lilian, she stood, scarlet lips stretching into a beaming smile. She eyed the rose clasped in Lilian’s hand.

Lilian held it aloft. “Yes, I --” Excruciating pain stabbed through her chest and the blood drained from her face. Dropping the bloom, she staggered forward, scarcely aware of Jean’s arms around her, guiding her onto the bench. She slumped against Jean’s chest. “I-I’m sorry,” she stammered, panic refusing to release its stranglehold. “I’m so late.”

“Not that late.” Jean squeezed Lilian’s shoulders and planted a kiss on the top of her head. “And I don’t mind waiting. Not when I get to spend time with you.” She grasped Lilian’s hand. “Are you okay?”

“Uh-huh.” The sunlight reflected in Jean’s eyes as she gently wiped the sweat beading Lilian’s brow. She slid her arm further around Lilian’s waist and drew her closer. “Silly girl, did you rush here and get all het up?” She clicked her tongue. “You shouldn’t have done that. I’ll always wait for you.” Placing a hand beneath Lilian’s chin, she tilted it upward and kissed her lips.

“So kiss me.” Jean leaned in, lips pressing against Lilian’s.

In spite of her reticence, Lilian responded. She pressed hard against Jean’s soft flesh and parting her lips, drove her tongue inside the hot wetness, kissing her passionately. At the sound of running feet on gravel, she abruptly broke away and slid a distance from Jean as two boys careered into view. They grinned at Lilian and Jean in turn before charging off back the way they’d come.

“No,” Lilian glanced around, “I can’t. There’s always someone watching. If not them, someone else. I-I can’t do this anymore.”